So here’s what I’ve been able to gather so far even though school is taking up much of my time. 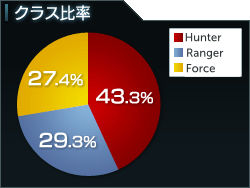 Each level shows how many characters were level 1 through 20.
Each color represents a class. 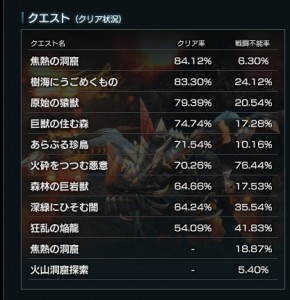 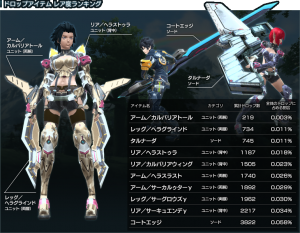 This is the rare item drop ranking. The item that rarely dropped was アーム／カルバリアトール Arm/Calbariatoll (sp?) (Well yes, most of these unit names sound very foreign. Perhaps they have European naming influences so the localizer will have to come up with some fancy names.) You can actually see this unit on the female’s arms. In the picture itself going from left to right, the left column is the item’s name, then the item category, the total number of drops, and the percentage it dropped amongst all drops. So you can see the sword the Humar is wielding, Coat Edge, is the rare item that dropped the most. 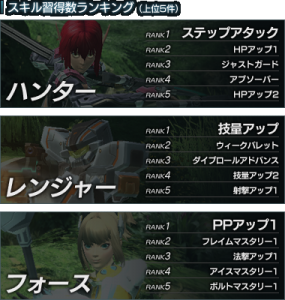 Ah! What does this stuff mean? Well this is the Ranking of the Top 5 Skills. As you know each class has a skill tree, and you can pick and choose which skills you want for your own class.

So I recall being asked what “Ability” means. All I know is that it’s a stat that seems to have replaced accuracy. I don’t really understand what it does, even considering how the word “ability” is not very descriptive at all. You could also call it “Skill” instead, but of course that will confuse people into thinking you are talking about the skill tree. 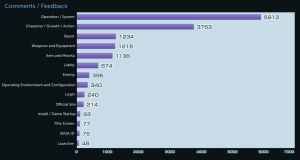 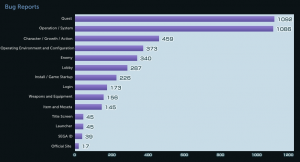 The charts above indicate the number of comments/feedback and bug reports they received on each category. Although the categories are pretty broad, Sakai will go into more details later on with what this means.

Question 1: So the questionnaire asked about the control schemes players used. Most people played with the gamepad. Technically the gamepad is actually around 70% because you can use it with the keyboard. Question 3: Coinciding with what you saw in the TGS presentation, this is a pie chart showing what aspects about the game needed better support. Mainly the user interface was of big concern. (Which lead the team to decide on changing some aspects of the User Interface so it won’t be so hard to understand, as announced at the Tokyo Game Show. ) There were also opinions about how it didn’t feel right when controlling your character. 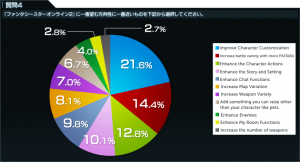 Question 4: This pie chart looks at what direction they should head into the most. Gamers mainly selected they should improve upon the character creation aspects. (This probably lead to the decision on adding Cast morphing to the character creation as they announced at the Tokyo Game Show,) What’s interesting to note here is the entry asking if you want to raise something like a pet. (When checking 2ch about this question, one asked if the pets refer to Mags?) Not that this pie chart confirms they are going to add a pet, but it looks like it may have been on the drawing board. 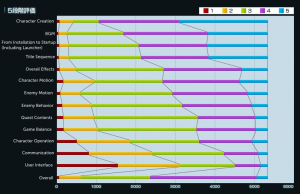 5 Point Evaluation: And finally we get to the most confusing chart. In this chart, users were asked to rate different aspects of the game from 1 to 5. The lowest score (1) is indicated by a red bar whereas a score of (5) is indicated as a blue bar. The longer the color of the bar, the more people gave it that score. If you go back to Question 3, you can see the areas that were most chosen there, are shown on this chart with the longer red bars. The UI, communication, and controlling your character were given low scores, while character creation, and BGM were given high scores.

We know that the Wired Lance can not throw the larger sized enemies, but a while back in a Dengeki Magazine, it noted that you could use the wired lance to rip off parts on the body (ex. armor). When Shougai attended the 2011 Tokyo Game Show, they asked about this information to PSO2 Director Kimura. Kimura instead apologized saying they currently have no plans to implement that feature. Yikes! So we can scratch this one off for now.