Arkuma Slots is a game of high risk and high reward! You’ll have to cough up high amounts of casino coins to play, and travel through space defeating Falz Arms along the way. When engaged in a battle, choosing the correct enemy will earn you bonus coins. Choosing poorly will result in losing not only the game, but all of your accumulated earnings for that session too. 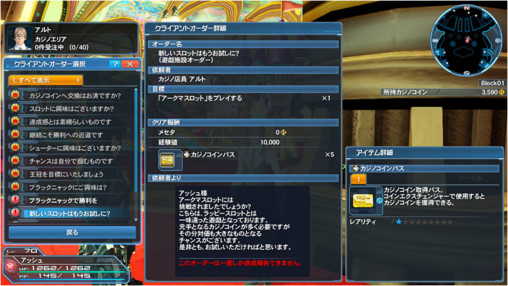 Head over to Alto for a selection of new client orders covering the Black Nyack and Arkuma Slots casino games. 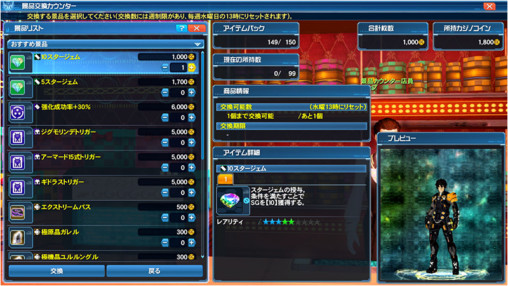 Exchange your Casino Coins for new prizes, like SG Tickets worth 5 or 10 Star Gems.

PSO2 The Animation’s Yumiko and Last Samurai will take residence in the Shop Area lobby for a limited time. By clearing their client orders, players can receive their partner cards too! The happy couple can also appear together in Emergency Trials. Let’s soak up the sun with the debut of this year’s Summer event! Slip and slide your way down wacky water slides in the revived Summer Lobby.

The Beach Wars Emergency Quest returns with a brand new format! Players can utilize Dash Panels like those seen in Tokyo as they rush towards the enemy spawn points. The mighty Gal Gryphon and a Chrome Dragon with a special prefix in its name will swoop down on players as the quest nears its end. Gold Weapon Badges will be awarded after clearing the quest.

This quest will also feature a special prefix named Empe Rappy, who has the chance to drop the new ★13 Wired Lance, “Let’s Go Shiny!”

The totally tubular Summer variations of Nyau and the Rappies are surfing into PSO2 with gnarly new weapon drops.

The Summer 2016 Bingo will task players with defeating enemies appearing in Beach Wars 2016. Other objectives will target the Casino and Story Board. Those who progress through the Bingo Card will earn a new Launcher weapon camo! Take down the Battleship Yamato on your own time with the addition of the [Steel Prestige] Trigger Quest! While this quest remains roughly the same as its Emergency Quest counterpart, the triggered version does not generate a completion boost effect. However, you can still take advantage of this if you time your Trigger Quest to begin after the Emergency Quest activates its completion boost.

Additionally, utilizing the Trigger Quest while the Emergency Quest is active will not increase the annihilation rate for the EQ. For two weeks, popular items from previous scratches will return in a new 4th Anniversary revival scratch. Split up into two categories, the scratch will feature a wide variety of both cosmetic and support items.