Last night during the Dengeki Game Festival 2013, Sakai showed some footage of the new Hatsune Miku costume and mag collaboration coming in April.

The hosts took a tour through the Hot Springs Team Room where we discovered there's separate male and female changing rooms. A door will prevent male characters from entering the female changing area. When this happened, the audience chuckled as the male character exclaimed "I can't see… the panties…"

They also showed an extended trailer of the new Dragon Sanctuary (or Dragon Altar) field coming in April. It was interesting to see Dinians mounting an enemy. 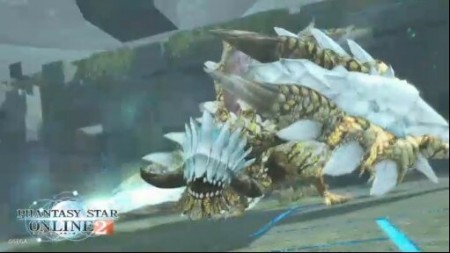 Shougai (Japanese PSO Fansite) talking to Sakai at the Dengeki Event, inquired about the Dragon Boss that appears in the new field. Sakai said his name is "Dragon EX (or Dragon X)" When he's enraged, his body parts change color.

Shougai (A Japanese PSO fansite) got to chat with Sakai at the Dengeki event asking what areas of improvements he has for the game. He can't say when but there's a possibility we may see several emergency quests occur at the same time.

What we don't know