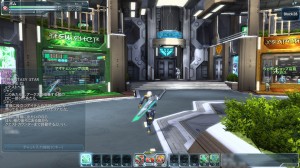 In the Visual Lobby's town area, there are shops on the first and second floor. Only the Weapon and Item shops seem to be open at this point. 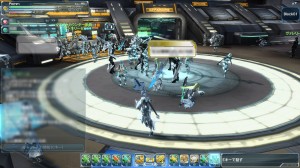 This Terminal Area has the quest counter and skill counter. After you accept the quest, you enter this Camp Ship area where you make preparations before you enter the field. Unlike the lobby, you can perform battle actions here. 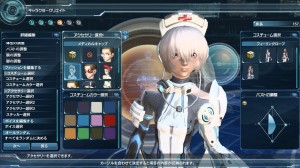 Color choices for costumes! Use accessories like the Medical Cap. There are two types of quests, Arks Quests which has a specific goal, and Free Field where a goal is not determined. When you meet specific conditions quests will appear. Sometimes quests will appear by simply finishing one, sometimes special quests may appear if you encounter and defeat a specific enemy. At anytime you can send items to the storage box and access them easily in the lobbies and camp ship area. You can place items, skills, technics, in the palette. GameWatch specifically points out that Forces can set technics in the subaction palette using the 1 through 0 keys or the L2 and Cursor key button on the gamepad. 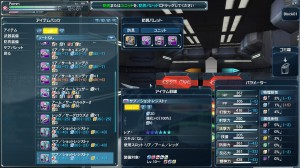 A Photon Sensitive Effect may occur which can give you effects like increasing your Striking, Ranged, and Tech Power, and the amount of meseta you can receive. After PSE is triggered and you attack enemies, the effects' level rises. When you exceed the 8th phase of  PSE, you can achieve a PSE Burst, which greatly enhances the effects. Like for example, if you were doing Foie and it did something like 100 points of damage, it can increase to around 400. GameWatch mentioned that PSE has some sort of omen/sign (予兆), but they weren't able to understand what that meant at the time.

As GameWatch's party entered further into the quest, they reached up to an entrance indicating that a multiparty area was coming up. Here they met up to 12 players all in the same area at the same time.  But in these areas, often-times strong enemies await here, like boss class enemies. But we have to say "often-times"  because there's still a random element going on here as well, and based on the quest, these enemies may not show up. Planet Naberius (Naverius) has a few boss enemies. These include, the Rockbear, a huge beast made out of rock, Priada, a huge insect, and Beize, a large sphere that absorbs energy from nearby enemies and grows until it explodes.

The Beize can grow very large and explode giving you great damage. In the Planet Amduscia, the Vol Dragon may randomly appear. This planet is a stark contrast from the forest, and features lava that can even spout up and damage you. When it's weakened and falls to the ground you can jump on it's back and attack. In the quest GameWatch played, the dragon's appearance is random. After GameWatch defeated this dragon, a new quest appeared where the goal of the quest was to defeat the dragon. So to reiterate, some quests won't open until after you've defeated a specific enemy.