Alright, a little behind but lets get back on track.  First, Phantasy Star Portable 2 Infinity will have yet another collaboration with Famitsu. This includes a brand new weapon called ファミ通デンドウブレード. 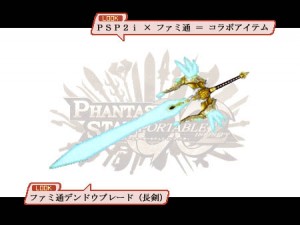 According to Shougai, at the time of this writing, it is unclear how one will obtain such a weapon. According to legend, “A sleeping power awakes once you defeat a certain amount of monsters with this weapon.” It looks as if it will get stronger in some way…

Now this is not an announcement for Phantasy Star Portable 3, so don’t get your hopes up. During an interview with Dengeki Magazine, Sakai and Terada were talking about how they should make PSPo3. The point being that if they do create Portable 3, the “world” would have to completely change.

(I would almost speculate this “world” might be based on a future game in development. Shougai also believes this world may possibly go along the lines of “Phantasy Star Online 2 Portable”. It’s the best educated guess one can come up with.)

Alright, so for those of you who somehow didn’t know about the breaking news from the latest Dengeki, Phantasy Star Online 2 will start releasing news about the game sometime in April. Phantasy Star Online 2 was developed parallel to Phantasy Star Portable 2 Infinity. During the last days of the Fan Thanks Festa, Sakai may announce details of the game. For now all that’s known is it will not take place on Ragol, or Gurhal. The logo gives indication of what the game’s setting symbolizes. So expect to play a new adventure in new worlds!

In another magazine (Famitsu Connect!On) Sakai had a pretty similar quote as from Dengeki but with a little modification. In Famitsu, Sakai says that around the time when PSPo2i comes out and/or the Thanks Festa 2011 Events, it might be good timing to release some kind of information about PSO2. The development is far advanced than you might think. Afterwards,  the PSPo2i staff will be joining development towards PSO2, which will help speed up the pace. So please attend the Thanks Festa Events!

(So we may have some kind of information earlier than we expect, but in that regard, could it mean at the finals of the Infinity Grand Prix we will have another major announcement?)

Now a question for all of you, does anyone care about Eternal Hunters?

Sakai doesn’t like your manners! So he made a list of activities people tend to do in the demo that is a violation of the Terms of Service.

If any users found to be doing the above, one should send a screenshot/camera picture and complete the form for wickeduser. Send the screenshot displaying the character’s online ID which is their PSN account name.

Yes, the Japanese server doesn’t play around. Modded Mission Codes are any mission codes that features anything outside the range of, “Beach/Snow/Autumn area” and “Giel Zohg/DugaDunga/Zoal Goug” bosses. If the special effect says, “敵レベル＋” or Enemy Level +, then that mission code data was modded. Please refrain from using it.