Today, PSO2admin sent an email newsletter to announce the date for when the winners will be announced.

Hello everybody, we’ve been working diligently on developing Phantasy Star Online 2. We have finally decided on a date to announce the winners of the alpha test. In addition we’ve provided a special wallpaper for those of you who registered for the alpha test…

Next week, June 24th, we will send an email to the first phase of candidates  who were chosen to participate in the alpha test!  To have many of you participate, we will also increase the amount of chosen candidates. But regardless, the first wave of selected candidates will be notified via email on June 24th.

Regarding the wallpaper, it depicts a picture of friends running through unknown grassy plains as they embark on infinite adventure…

As for the official site, we’ve placed several screenshots and a promo movie. Though these are under development screenshots, it gives you the atmosphere of the battle and field in great force. If you haven’t already seen them, check  them out at the official site! 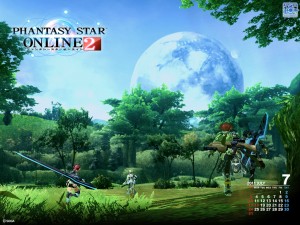 Next time, you can enjoy a follow-up report! Shino is composed of a black, glossy, molding with several additional parts. Her weapons include; H&S25Justice, Beryl Knuckle, Agito, and a Handgun. You can change her eyes to look forward, right, and left. Fans will recognize the Varaha mag from PSO! The weapon parts are also compatible with Elenor!