Did you guys enjoy creating your characters, especially now that you can actually read it. Well this post dives a little bit on the technical side of the benchmarking. If you are going to purchase a laptop or desktop for PSO2, this post should come as a handy guide on which graphic cards or computers you should purchase. Before purchasing always check the graphics card to see how it stacks up against others.

Before you read on, don't get too hung up on your scores. If you saw that you ran 30fps on the setting you were on, then you can still play the game well.

4gamer performed their own benchmark test on their own computers. The results of their tests are based on PSO2 Benchmark Scoring System as well as Fraps frames per second logs. The post below is a quick summary of their results. Their post looks into whether the Graphics Cards or Processor (CPU) affects the benchmark score. 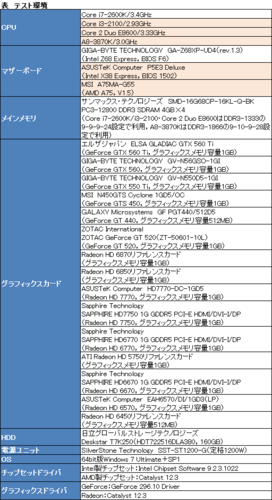 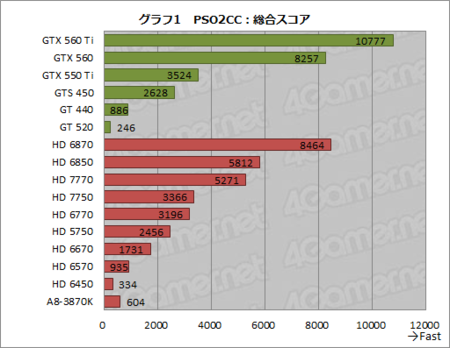 What's interesting is how the ATI Radeon HD 7770 outperformed the Nvidia 550 GTX Ti, considering both are 1 step down from their powerful counterparts. (As pointed out in comments, Radeon 7000 is a newer series which is why it outperformed the older Nvidia 500) 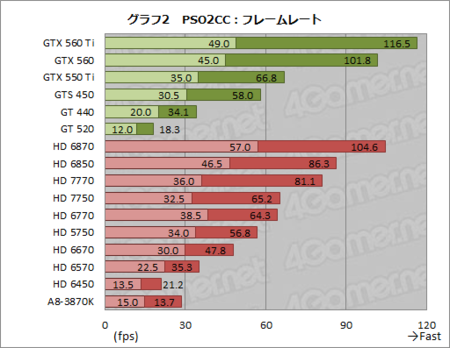 Using Fraps, they mapped out the average and lowest frame rate recorded. The GPUs with benchmark scores above 5000 have an average frame rate of more than 80 fps.  The GPUs that scored 3000; Nvidia GTX 550 Ti,  Radeon HD 7750, and Radeon HD 6770, all averaged more than 60 fps. (The A8-3870K is kind of unique, it's an APU where the graphics card is embedded within the processor. This processor has a ATI Radeon 6550D, so the fps is slightly better than Radeon 6450. We're not quite sure why the FPS says 13.7, it could possibly be a typo since the bar is closer to 28.)

The next chart looks at if the processors made an impact over the benchmark scores. Four different processors were tested using the GTX 560 TI graphics card.

The four processors tested were Intel's Sandybridge processors Core i7 and Core i3 (with hyperthreading on and off), a 2008 Core 2 Duo E8600, and AMD APU A8-3870K. The Core i3 processor has 2 cores, with Hyperthreading enabled, it turns these 2 cores into 4 virtual cores. Even so, there were hardly any differences with the scores, though the older Core 2 Duo score fell a bit.

For the Sandybridge CPUs,  the number of cores didn't make a huge impact on framerates. The older Core 2 Duo E8600 still had a reasonable framerate. 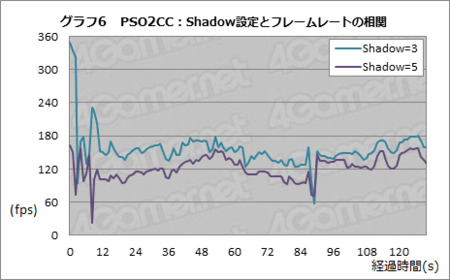 With the Nvidia 560 TI Graphics card, you can see that the Shadow Quality has made an impact on the frame rates.

The shadow quality seems to affect the scenery more than the characters themselves. You can see a profound effect on how buildings are highlighted. The benchmark score also seems to have taken a nosedive with shadows at 5.