Now the post we've been all waiting for, Closed Beta Features! In the closed beta you can now change your class and level that up to level 20. 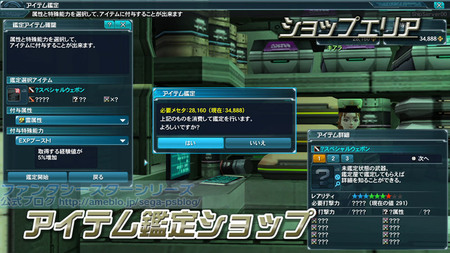 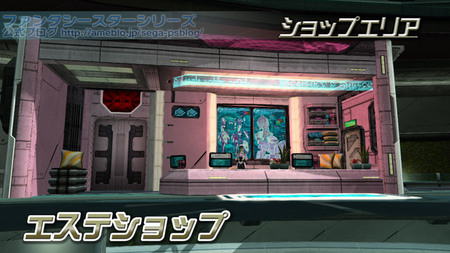 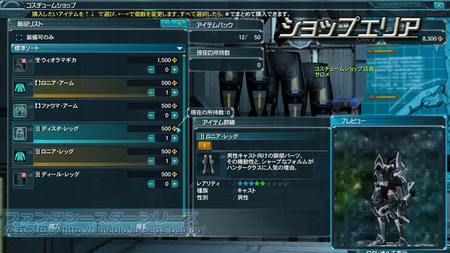 In the costume shop, they will sell default clothes and parts for meseta. Now there's a preview window in the lower right corner to see what the outfit looks like. In fact this same preview window also shows up at the weapon shop and player shops, and you can see what a character looks like with the weapon or clothes. 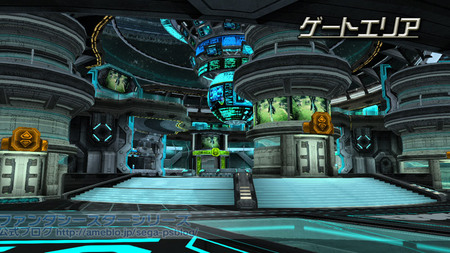 In the gate area you can watch the camp ships depart and watch the screens on the monitors. 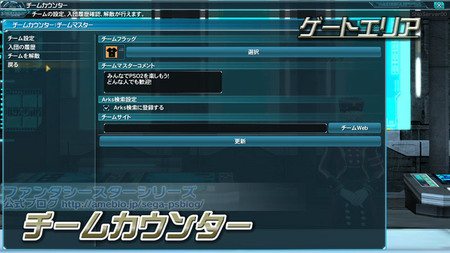 There's a team counter here. If you are level 10 or up in any class, you are allowed to set up a team. 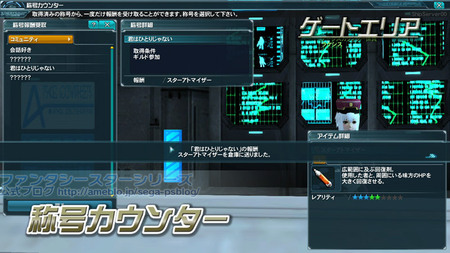 Like the portable series, the Title Counter allows you to win special things by completing specific activities. 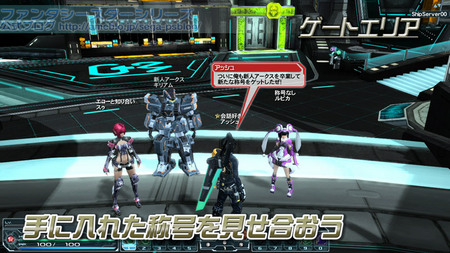 You can also display a title you received over your head to other players, like in the portable games. 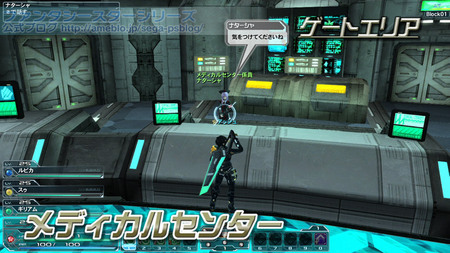 The Medical Center is different from PSO. If you are familiar with PSPo2's Sayo, you can get a special effect that lasts for one quest by purchasing drinks. As you progress through the game more drinks are available. The medical center doesn't use Arks Cash. 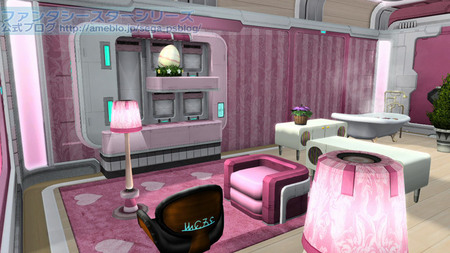 My Room now has more themes and room items than Alpha test 2. Arks Cash is needed to get a room, but you can go to other players rooms for free. You can get room items from drops, purchasing them in the lobby, or client orders. 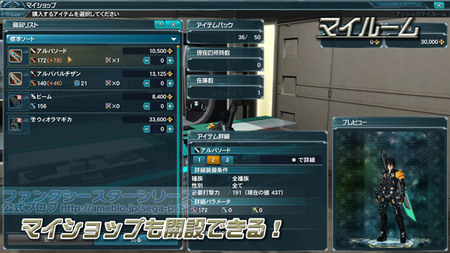 Now there is an item to access your Player Shop from your room. It's a bit different from accessing the shops through the visiphone, with this item you can access the room owner's shop directly. 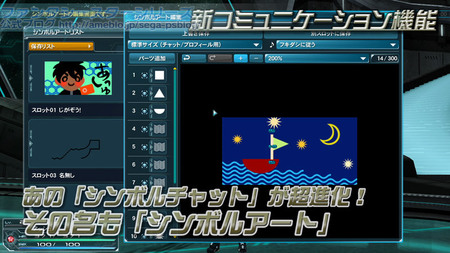 Symbol Art allows you to create a picture using more than 200 pieces of art symbols and shapes at the same time. They have preparations to have more than 300 varieties of symbols you can choose from. You can use these symbol art in speech, and even as a mark representing your team. Sound effects are available too, (even the OLD ones…) 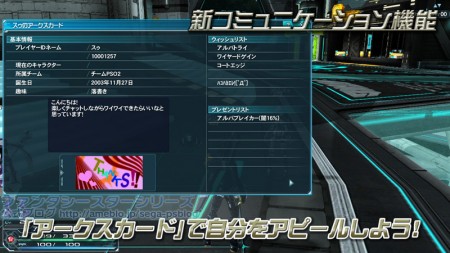 Like a partner card or guild card, you have the ARKS Card. Write a paragraph introducing your character, and type out a wish list. You can attach symbol art here too! 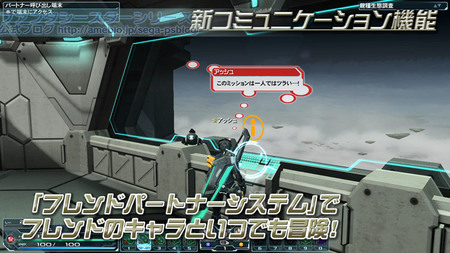 Like PSPo2i's Support Characters, the Friend Partner System lets you summon a friend of yours as a party member. You can't summon characters who aren't registered as friends though. Friend Partners are controlled by AI, they will use whatever your friend registered as auto words too just like PSPo2i. 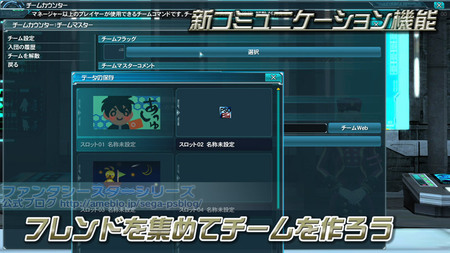 The Team system similarly to PSOBB, lets you have up to 100 members in one team. You can even input a website of your team here too. 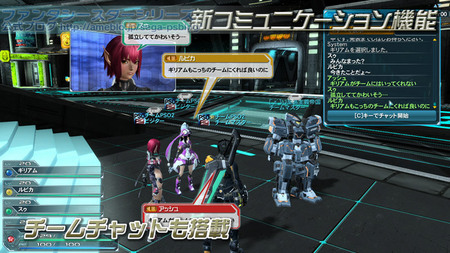 There's also team chat, that lets you talk only to team members.

Right now, there aren't any elements implemented for raising your team. (Though not specified by Sakai, let's say your team could have levels and things unlock as you gain more levels.) They may add some elements like this in the future.

There's more information to be discussed about the Closed Beta Features but for now we'll wait for a future post from Sakai. 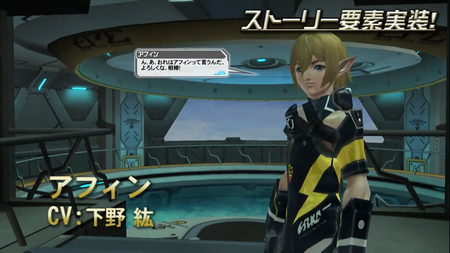 The role of Afin (Affin) will be played by Hiro Shimono, you may know him as Alone from Saint Seiya or Sho from Fairy Tail. 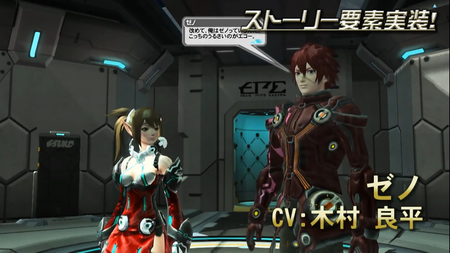 Suspicious Ethan Waber lookalike Zeno will be played by Ryōhei Kimura. You may know him as Shouma in Spinning Penguin-Drum. 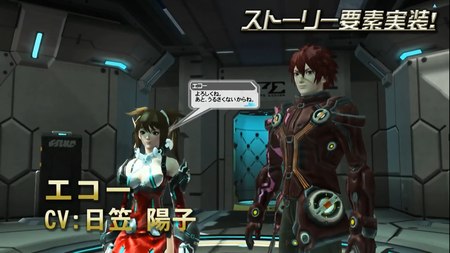 The role of Echo will be played by Yōko Hikasa, you may know her as Mio in K-On!

[It] is essential to streamline organizations in the field of home video game software in the U.S. and European markets, while shifting to a structure that corresponds to change in environment, including strengthening development in the field of digital content.

We conducted detailed reviews of earnings projections for titles targeted toward the U.S. and European markets and decided to narrow down sales titles from the following period and after to strong IPs, such as "Sonic the Hedgehog,", "Football Manager", "Total War" and "Aliens" which are expected to continue posting solid earnings. In accordance with this, we are canceling the development of some game software titles. [segasammy]

Not that I'm intending to make this doom and gloom, and considering PSO2 is Free to Play anyway, this is still something you should think about. Not just for this game but other Sega titles you are expecting. We await the list of which games are cancelled and then we can make an informed conclusion from there.