Bunkohara, an assistant producer for Phantasy Star Online 2 sent out an email revealing that Forces exist in the game. In addition, she distributed an image on what the Rappy will look like. She herself intentionally censored parts of different sentences, these are reflected with a _____ space. 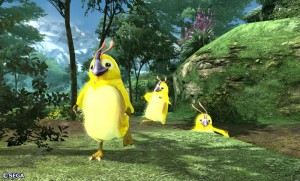 Rappies are the mascots for PSO, this time in PSO2 their cuteness has increased "200%", you can meet these rappies by first going (to/in/at) ____. 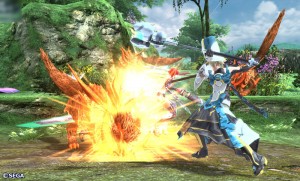 Bunkohara mentioned that many users asked lots of questions about Forces, (because they were not previously shown.) But they do indeed exist, and are capable of hitting enemies with the rod just like PSO. 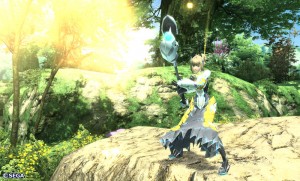 Something coming out from the rod. 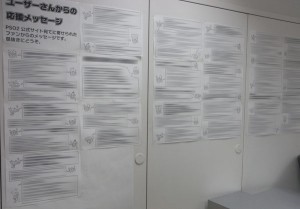 Remember that site where you send your PSO2 message to the staff? They are pasted here on the bulletin board for all the developers to see, so your wishes are not in vain.

In this particular screenshot Bonkohara made a note about how it has been censored. Although they censored the top left corner and the name of the Fomar that's attacking the enemy, there was one name that was left intact. Perhaps  Bunkohara [accidentally on purpose] forgot to censor this name.

Sue's name can be seen by the Fomar's weapon. This "Sue" behind the enemy is kind of similar in appearance to her, yet her name appears in blue. Although from experience, blue names usually signified GMs, however Shougai speculates that it may be a partner. Oh well. We also note the Fomar's name also appears to be in blue. Not really sure what that means at this moment.