On December 17th, players will face the gigantic towering boss known as “Magatsu.” This boss is strong, powerful enough to destroy massive protective walls with its body.

The goal for this quest is simple, players must prevent Magatsu from advancing and destroying all the walls. They’ll have various tools at their disposal like turrets, photon particle cannons, and the [calamity-binding arrows] used to hinder its movement. 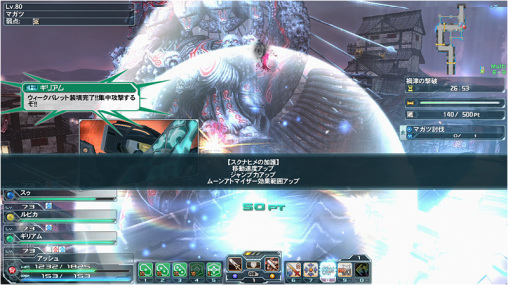 The quest will introduce “Quick Emergency Trials,” where players are tasked with objectives like “defeating specific enemies” or “evading Magatsu’s attacks.” As they continue to fight and clear the objectives, they’ll earn points for Sukuna-hime’s Divine Blessing! This blessing grants players with higher jumping ability, faster movement speed, and a wider Moon Atomizer range.

Players will also have the chance to acquire new 12★ weapons, some of which came from previous Phantasy Star games.

New crafting room items like Craft Ex Maker 4, Craft Tech Maker 4, and Craft Timed Maker 4 increases the chance for a Great Success a tiny bit more. These room items can be yours at the Crafting Shop.

A soothing escape in a beautiful garden, where the cherry petals flutter about. Let’s go on a stroll, enjoy the cherry blossoms, and listen to what our fortunes are for today.

This scratch features a new collaboration with Space Battleship Yamato 2199. Susumu Kodai, Yuki Mori, and Akira Yamamoto costumes & voice tickets, as well as other costumes depicting the Yamato captain and crew will also appear. These new voice tickets come with extra chat commands, with [/vo12] as a self introduction, and [/vo13] through [/vo22] for various lines of speech.

New Years Furisode and formal wear costumes will also be available in the scratch.

You can also overlook the Yamato from the Arks shopping lobby, or place it as an item in your room.