Good Morning, today a new email newsletter was released showing some new images.  But first, Sega now has an official Facebook Fan Page for Phantasy Star Online 2. Update: So apparently they do respond in English on this Facebook Fan Page. (So of course we're starting to wonder about that whole global thing.)

Update 2: After amassing 500 Likes, Bonko has decided to sneak into Sakai's desk. What will she find there?

The official site will show more new images and info on August 1st. So be sure to check it out! 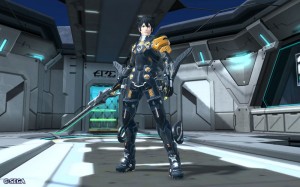 Oh My! There's something sticking out behind this character? Could it be? Mags? Nope, this is called a unit. This time certain units change the visual appearance of the character. You can also use Mags too, so Mags and Units can make your character have such a unique look! Did you know that the units are attached to the arm, back, and leg. They can increase your defense and attribute rate. 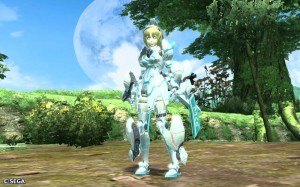 Why not attach them to your RAcaseal 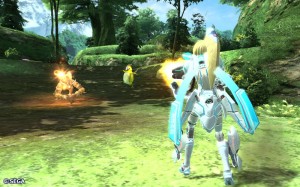 Oh! Here it is from behind. 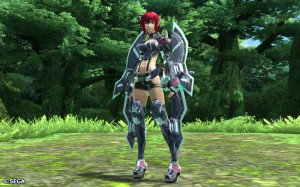 Did you know this is Bonkohara's favorite unit? Here's a HUnewearl wearing a unit with such a sharp design, it almost seems like a weapon. 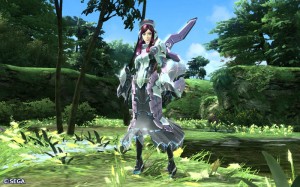 Oh! Here you can attach it to this "Nurse" character.
Yes you can make such a character. This facebook page could be a treasure trove of hints, I mean look at this question they asked.

Bringing back the Main Class and Sub Class reference. Unfortunately people are now adding their own answers so there's a possibility this last answer wasn't originally there.

Filling in the gaps of old news that didn't get posted previously.

The videogame news sites described the classes based on their distance away from the enemy. Which seems strange to think Forces were described as long range combat instead of Rangers.