It’s time for the Alpha Test 2 Players Report! But first, Sakai updated his blog, he took a break last week from updating because he wanted to blog about the Alpha 2 report when it was finished.

He was also on a talk show discussing the Racaseal model he previously mentioned a long time ago! Here’s how his came out. 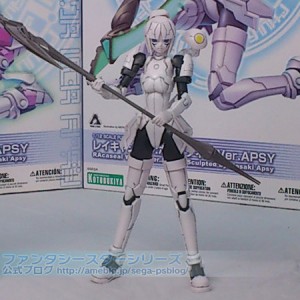 As for the future, he will push production at a faster pace now so you won’t have to wait too long between tests. In March he’s going to announce some details about the Closed Beta test!

Our next porori image is the RAnewearl, you’ve been waiting such a long time to see it, so here she is! The top of her outfit is lightweight, but the bottom is solidly protected. You should expect to see the in game model later on.

It seems the number of people simultaneously connected dropped off during the last days. Each of the 4 boxes represent the most popular costume and hairstyles for their race and gender. Human Males chose the default Humar costume “Close Water” and hairstyle “Short Wolf” A very difficult quest seems to be “ダーカー調査：森林” Darker Investigation: Forest with its low 29.19 success rate. The Volcano Cavern quest seems to have a high mortality rate. Is the boss killing the players so easily? This chart shows the rare item drop rates. Each item and unit featured on characters dropped the least amount.

The most popular items purchased at the My Room Shop

On Planet Naberius, Dynal will randomly pop up in an Interrupt Event / Emergency Trial. Here’s the stats for each trial. Most of the bug reports and feedback were mainly about the GamePad since on the first day it didn’t work properly. There were also lots of reports about lagging. Some people had issues with My Room which may have been caused by server load.

Compared to the amount of people who played, not many participated in the forums. But even so, there were lots of topics regarding player controls and the battle system. So these three boxes represent the answers given in the questionnaire. The first one shows the percentage of people who participated in the previous alpha test. The second question shows if people were able to play the game successfully. The majority of people had no problem playing but 12% were only able to play solo. 65% of people played with the gamepad. Compared to the last test, User Interface, Character Creation, and Communication ratings increased the most. However, BGM lost a few points. I’m sure it has something to do with the music that plays over and over when you finish a mission. Get back to work Kobayashi! People voted on which features should be improved upon in this game. This time people wanted more weapon categories which now we unofficially know is coming.

Well that’s all for now, in mid March, just like last time, Sakai will respond to user feedback informing us of what changes shall occur.