Sakai updated today with his status report blog post. Here's a summary of what happened so far. We never had any emergency maintenances for a whole week and they launched their first crystal dragon update. Next week they will implement the second part of the update with the new field and new boss!

There's still a few kinks left in the server, at times a block may go down, or when they release an update with new costumes, the My Shop menu gets bogged down. They will continue to make adjustments to fix problems to make your gameplay experience more comfortable.

As for some of the feedback sent in, a while back people reported that the bosses in story mode were very difficult. Sakai plans to make some changes about this in the future.

As for that annoying Koffee, he's thinking about relaxing some of the time limits you have to do to open up the different fields. He's planning to make some adjustments to this probably as early as next week.

He's looking into making some adjustments towards the game's balancing. It's going to take a while to do this because they'll have to perform some tests and calculations to see how everything flows out.

If you're at the level cap and feel like there's nothing left to do, you can expect new classes and new quests in the future. Also later on, expect to see some content geared towards higher level players.

As for yesterday's update, they've received many reports that the new Emergency Quest featuring the Fang Banthers has not yet appeared on certain ships. This isn't a bug though, the quest's appearance is determined at random, they are sorry for the stress this has caused for ships who haven't received the quest yet. They believe they should use this sort of problem as a reference to think about how they'll distribute content in the future.

As for next week's Crystal Dragon update, there's going to be a considerable amount of bug fixes, he didn't specify what they are for though.

As for today's porori image, it's the concept artwork for the Quartz Dragon! 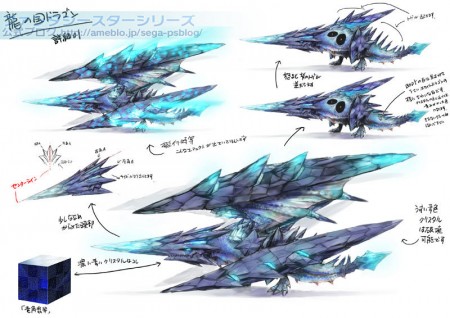 Does his head's design remind you a little bit of Panzer Dragoon?