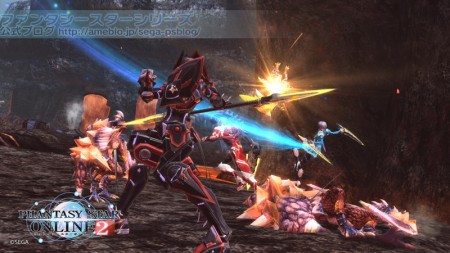 It was announced at the Dengeki event that we’re getting a new Character Creation Demo! This time the demo takes place on Amduscia. (Unfortunately you won’t be able to use the character you are currently playing, considering there’s no option to save them at the Aesthetics Counter.) 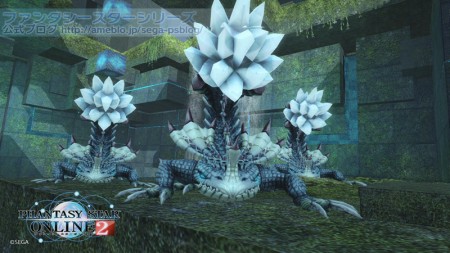 The demo will also include the new Dragon Altar field and boss coming in April. 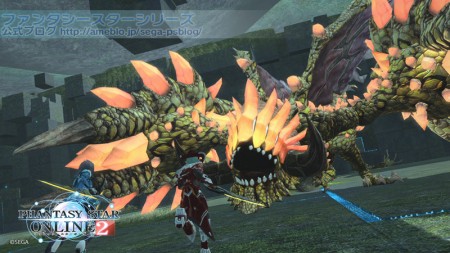 You may recall this scene in the Youtube Video.

Other April Adjustments and Changes

I’d like to be able to grind items in the item lab even while they are locked.

These changes will be applied some time in April.

The following items will be removed from Scratch on March 27th, 2013. 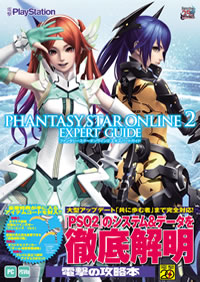 Shougai (Japanese PSO Fansite) had a chat with Sakai about Weapon Camos at the Dengeki event. “Not every existing weapon will be released as a weapon camo,” he remarked, “But, attached in the guide book, are camos of previous weapons with some slight alterations.”

Shougai found out two of the weapon camos in the Expert Guide are color variations based on Solid Straight and Blade Ball. Shougai believes that IF we send in enough requests at the official site, we could convince Sakai to create true camos of existing weapons. Of course you have to keep in mind that such a request will always come with a catch. But at least this idea will bring the weapon camo system closer to our expectations.

What we don’t know:

Earlier today, Sakai and Toshihiro Nagoshi (from the Yakuza Series) did a live PSO2 talk show answering various questions about the game. One question in particular asked if Sakai plans to implement a Casino. Well he’d like to try making it once they have the time, which seems to suggest that they have plans for it in a future update. Unfortunately this doesn’t really confirm nor deny whether a casino is coming.