Dark Falz finally made his appearance on December 12th, this quest is so popular that it increased the number of concurrent connections to the game. However, this month introduced a crazy number of bugs and graphical issues (which should have been mostly fixed by December 19th maintenance). These graphical bugs did not appear in internal testing environments which is why it took them so long to debug. To compensate for all those bugs along with the scheduled maintenance extensions, you will all get grinders! You get a grinder! You get a grinder! You’re all getting grinders!

Remember that the items you receive through campaigns or compensations are shipped to your 受け取り専用倉庫 Storage Collection, not your main personal storage box. This menu only shows up when you go to the storage box terminal in the lobby or My Room.

But that’s not all, to help ease your pain, next week, the number of grinders you’d win in FUN Scratch will be increased to 5. Also sometime next year, near the end of January, he will ease the amount of grinders needed to strengthen your weapon.

Next week around Christmas and New Years time, you’ll see an increased amount of Dark Falz emergency quests to coincide with the Christmas and New Years Special Campaign. The emergency quests will occur on all ships at 6:00 AM Eastern between the 23rd to 25th, and 30th through the 1st. Even if you can’t make it during those times, the quest will still pop up many times a day. 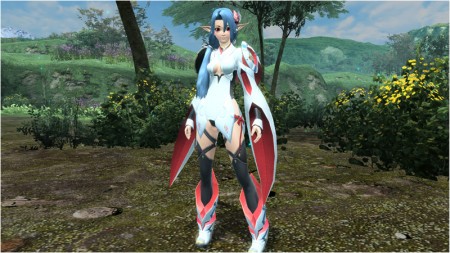 December 26th, is the Happy Wish New Year scratch, and on January 1st, the lobby will change at the stroke of midnight to celebrate the new year! After our last update for the year, expect to see a new video containing information about next year’s update. Also next week, expect to see this new information in various gaming magazines too.

This week at Jump Festa, players can experience the Ruins field and Zeshrayda boss on the Playstation Vita. Attendees can also see the full Playstation Vita opening movie as well as an exclusive promo video. The Lillipan, FOnewearl, and HUnewearl cosplayers from the TGS booth will also make their appearance. 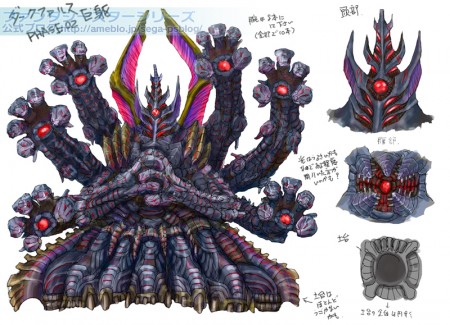 As for today’s porori image, it’s the concept artwork for Dark Falz Elder. His image is similar to Guanyin and the Thousand Arms.