Introducing the [Extermination Practice: Harukotan] Time Attack quest! Race against the clock, slaying hordes of Kuronite and Toy Darker foes in quick succession and defeating the Gal Gryphon boss awaiting at the end. Unlike other Time Attack quests, defeated enemies will not award items or experience. 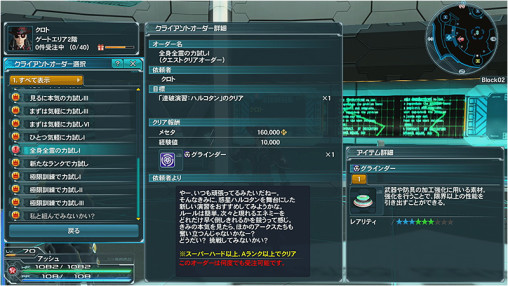 Klotho will receive a new client order, tasking you with clearing the new Time Attack quest. While you're at it, you can take on Girard's new rare enemy client order targeting Gal Gryphon and Gryphon Gels.

The Genesis weapons wielded by the Council of Six, Theodor, and Matoi can now be yours in the form of new weapon camos. Completing the Matter Boards of each episode will net you some [Creator's Emblem] title rewards! This item can be traded in at Zieg's shop to receive a Genesis weapon camo of your choosing.

From the ongoing TV anime series, Aria and the Scarlet Ammo AA, comes the costumes, hairstyles, and weapons of lead characters Aria and Akari! Winter coats and Chinese style CAST parts will also appear in the scratch, alongside a new variation of the China Dress.

※Looking for naming suggestions for the Chinese costume & parts.