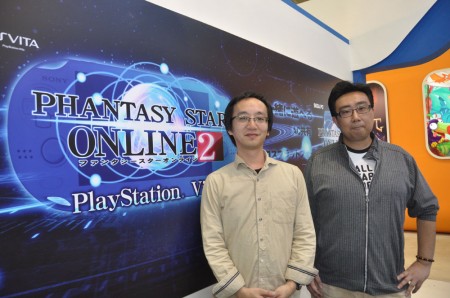 Sakai was interviewed by THIS IS GAME a while back at the G-Star event in Korea discussing the current concerns and future of the game. Within SEGA, they consider the game a miracle hit as more and more people connect and play. But he feels the game hasn’t reach satisfaction yet. Several months after the game’s release, he’s heard many complaints. Since the variety of content appears to be limited, in future updates not only will we  “Search through planets, defeat enemies, etc.” like we usually do, but he plans to introduce something completely new. After we reach the story’s conclusion we will move onto a “New Story.”

(Shougai believes this new story is a hint towards PSO2 Episode 2, and that this new content is a clear departure from what we’ve been doing so far. If you place both stories together I guess you could draw conclusions as to what we’re getting.)

Sakai and assistant director Takuya Ogawa were both interviewed at G-Star in Korea, this time showing off PSO2 in the B2B Corner. Though the majority of the interview outlined what lead up to the public outcry over the EXP requirements in the October update, they vaguely mentioned some plans they have in the pipeline.

When asked what contents they plan to implement in the future, sometime around the New Years or early next year, something new you can “play” will be added to the game. By then, we’ll meet the game’s first climax and we’ll move towards the next big thing.

Sakai wants to make the lobby more interesting. He quoted some suggestions voiced by players including that he should “bring back the soccer lobby”, or allow people to “sit in chairs” and do “those photon chair races from PSOBB.” He hasn’t revealed what exactly he wants to do but maybe we can see something new to the lobby later on.

Sakai is really sorry about October’s EXP update fiasco, but wants to show you some new fun things around next year!