Chase ESCA Falz Mother across the moon's surface in a new update!

PSO2es will receive an Emergency Quest Ranking Event after this maintenance.

You have until January 25th to claim the prizes.

※ The quest requires a main and sub class level of 75 on Extra Hard.
※ The quest can only be cleared once per ship.

We'll update the name in the calendar to reflect the English Patch's selection.

Newcomers to PSO2 can receive a pack of beginner items by registering a new Sega ID and playing the game within the campaign period!

※PSO2 accounts created prior to the start of this campaign do not qualify for the prizes. The campaign specifically targets new registrations for PSO2, not PSO2es. 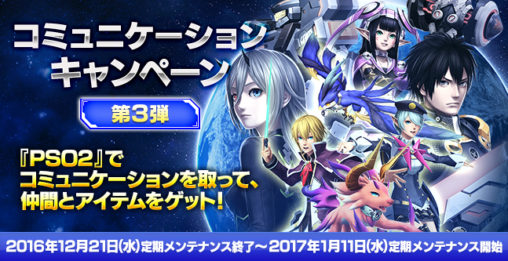 (1) Play in a team in which there were two or more members who cleared a Team Order during the campaign period.

(2) Play in a team in which there were four or more members who cleared a Team Order during the campaign period.

Your affiliated team at the end of the campaign period qualifies for the prize. Transferring to another ship will change that eligibility to the new team you’ve joined after the transfer.