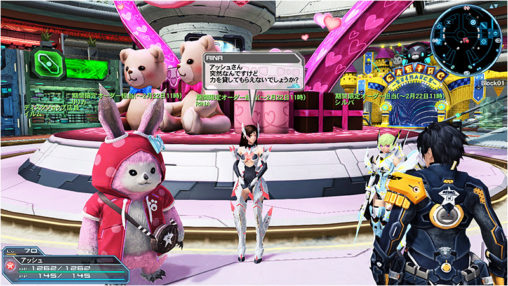 The ladies of PSO2 The Animation are back in the lobby for the Valentine’s event! Clear all of RINA, Silva, and Lilika’s client orders and something will happen during the White Day event.

RINA will also make an appearance in Emergency Trials.  Among the rewards for clearing them are [Arm / Fiogulls]; a ★12 unit that provides ranged, fire, lightning, and dark resistances, while raising the Max PP, R-ATK, and R-DEF.

Impress that special someone by clearing RINA’s client orders. Doing so will net you the [＊Frey Faegen ], a weapon camo with both Launcher and Talis functionality.

After revealing his true colors, Ardem’s relationship with the ARKS has become estranged.  Even with Al’s return, Ardem’s next move remains unknown, with Enga regretting his inability to stop his former leader. What sort of events will transpire under Ardem’s ambition for a “Paradigm Shift?”

The Valentine’s 2017 Bingo will see players chatting up the ladies around the ARKS Lobby. One reward of note is the [Evo. Device / Polar], a Mag fashioned after a lovin’ teddy bear.

The annual Valentine’s [Chocolate Way] Emergency Quest is back with a time-based evaluation! The faster you clear the quest, the higher your ranking will be. On difficulties of Hard or above, the number of Weapons Badge 2017 you receive at the end hinges on your ranking. 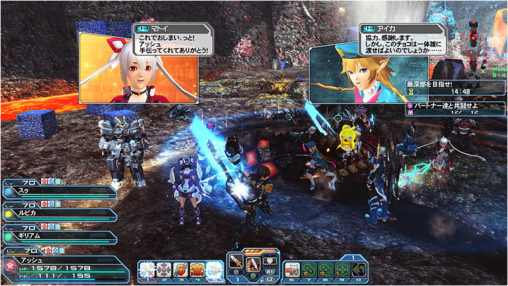 The Volcanic Caverns are filled with Darkers and Ultimate Amduscia enemies. Girls galore will pop up throughout the quest during Emergency Trials to help out. The Drago Deadleon with a prefixed name serves as the final boss. Defeat this deadly foe with the help of your friends and hope for a lucky rare drop!

The Chocolate 2017 Collection includes Sarah’s signature “Flow Razor” Wired Lance. Apart from that, the collection features weapons from the Fornis series, such as the [Fornis Beset] Twin Daggers and [Fornis Physis] Twin Machine Guns. To top it off, you’ll find ★13 Viola and Synchro pet eggs among the selection.

Woooo! In this corner we have the wrestling layered wear of a true champ of the ring. And in the other corner we have a cute apron and bondage gear. Sweet and sexy, these outfits are sure to attract your Valentine.