Tonight is your last chance to enter the secret phrase before maintenance starts.

This week's boost event and campaign information will be posted during and after maintenance. 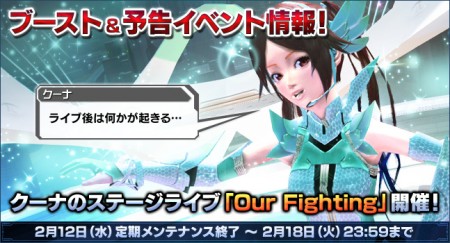 Lv 70. Falz appears 30 minutes after every live concert. A rare drop boost event will be applied to all 'Super Falz' quests scheduled in the tables above.

Spend the qualifying amounts of AC during the campaign period to get special prizes!

You can spend AC in any of the following ways:

*Note: Merely using the AC Scratch tickets contained in the bundle does not qualify you for this campaign. As long as AC is spent when purchasing the ticket bundle qualifies you for the campaign.

Create a Character and Level Up Campaign

During the campaign period, create a new character and level them up passed 10 to receive various prizes.

Characters created prior to the start of this campaign do not qualify. Even if several characters satisfy these conditions, you will only receive the presents once per account.