The Halloween Lobby arrives to scare up some fun with spooky decorations and an eerie atmosphere. Ghosts now haunt the lobby, popping up without warning at various locations to scare players. Participate in this year's Trick or Treat quest for a convenient way to earn rewards in the Halloween 2015 Bingo! Prizes include booster items and the recently added Galeru Crystals. Head to Lillipa's desert for the [Trick or Treat 4!] Emergency Quest, available for a limited time. Kuron's Toy Darker enemies will join the fray for this edition, along with bosses Gal Gryphon, Zeta Guranz, and Dark Falz Double's Douran and Dourill forms. Halloween decorations like jack-o'-lanterns can even appear during Emergency Trials!

Depending on the difficulty of the quest, players can obtain Lambda Grinders and gold and silver weapon badges. Take on a high difficulty for a chance at getting ★13 weapons. New ★12 weapons themed after the Lillipans can be dropped by defeating Barbarillipans on Extra Hard.

Slip into your favorite Halloween themed costume to receive a special PSE effect during the quest!

The event that connects past, present, and future. With only a single objective, the one who has traveled through this endless story will come but to one conclusion. New rewards available at the Title Counter will allow you to increase the power of weapons for your main class. Each of these titles will task you with attaining a certain number of weapon entries for specific classes. Just fill up your [Weapon Record] entries at the Visiphone, and visit the counter to redeem your reward!

Let's say you're playing as a Hunter. You could boost the power of its weapons if your record contains an adequate amount of ★10~12 entries of Hunter weapons. This boost of power would apply to Swords, Wired Lances, Partisans, and Gunslashes, but only when the class has been selected as your main.

Each Title has a different requirement, asking for weapon entries in specific rarity brackets. The effect from the Title will apply to all the characters on your account based on the conditions stated in the Title Reward.

Just keep in mind that you do not need to hunt for Gunslashes to fill up your [Weapon Record] collection. They will still receive the effect as long as you redeem a Weapon Boost title reward. Check out the team room and explore new features! A Team Scarf can now be selected from the team accessories menu. Choose the color that best suits the team and increase its solidarity. 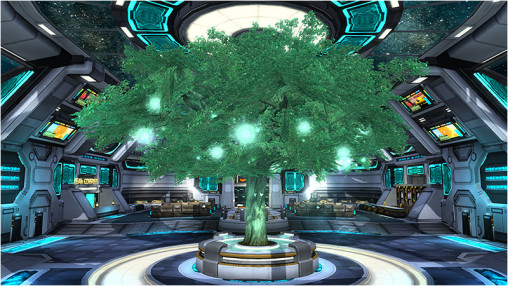 The team's Photon Tree can be grown to new heights, with the Photon Effect limits being raised to level 8. Zieg's got some new ★12 weapon client orders for players. Much like previous orders, you'll just need to show him the correct combination of "Live" series weapons to receive a fancy ★12 weapon.

Seraphy Returns to the Lobby The beloved Seraphy of PSO2es is coming back to PSO2's lobby with all-new client orders!  When you log into PSO2es with a linked account, you can receive [15,000EXP] tickets in PSO2!

[Double] Appears on the Field

[Double] will now have the chance of appearing in Emergency Trials during Free Field quests. Players who defeat them could earn new ★12 and ★13 weapons, or even new units based on their designs!

Some previously released ★12 weapons will now be able to drop from bosses on Super Hard or higher. In addition, some Darker bosses will receive new drops from the "Nox" weapon series.

※ Adjustments for Diffuse Shell and Parallel Slider will be announced in the future.

※ Adjustments for Orchestra, Illusion Rave, and Acro Effect will be announced in the future.

※ Invincibility frames will be adjusted in regards to when they occur, but this will not reduce how long they occur.

※ Due to the above changes, an All Skill Tree Reset Pass will be distributed.

Dress up in some new Halloween duds with vampire themed noble coats and a just slightly eerie Lillipan suit. Top it off with a black cat sorcerer Mag device and show your Halloween spirit.

※We're looking for better naming suggestions for the Coat Costumes.