4gamer was recently interviewed Sakai, and Terada, mainly about Phantasy Star Portable 2 Infinity. Sakai briefly talks about what the purpose about the PSO2 Alpha Test and a few tidbits about PSU Update 3rd. 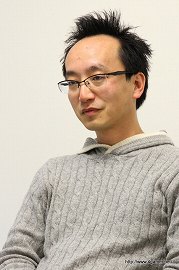 Sakai and Terada did a 3 page interview with 4gamer, so lets summarize the major points. This interview didn’t reveal any major aspects about the PSO2 though. (My personal comments are italicized and in this color)