Unlike the fearful Hitsugi and Al, Kohri remained composed, guiding the two as if she'd come to some realization. Thanks to her help, they manage to escape…but an unexpected character lies in wait…

The Sakura Lobby returns, filled with the calming sight of cherry blossom trees and falling petals. New to this year's version is the inclusion of a decorative ARKS Ball, giving players the impression of the ancient sport of Kemari. 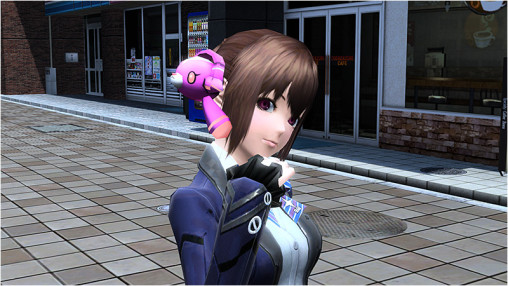 Our sixth ARKS Ship Competition will be held, with new prizes based on Arkumami. The [Sakura Cup] will split all ships into four groups in a battle for points. This time, the limit on how many points an individual can contribute will be raised as well.

Arkumami's prize shop will also include items such as Lambda Grinders and Challenge Mile tickets.

PSO2es' Jeané character will appear in PSO2's lobby for a limited time! By completing her client orders, players can earn Chip Fragments. Trade them at her exchange shop to get prizes such as the [＊Jeané Pillow ] weapon camo or a PSO2es Poster room item.

She may pop up during Emergency Trials to raise your spirits with her cheerful demeanor and help you defeat foes. You can even get Lambda Grinders by clearing these trials.

By completing her client orders, you can also unlock Jeané's partner card! She mains the Fighter class and wields a double saber.

Blend in with the staff of Franca's Café with new chef uniforms! Otherwise, go for an academic look with Tensei Academy student uniforms or stylish ARKS trainee blazers.