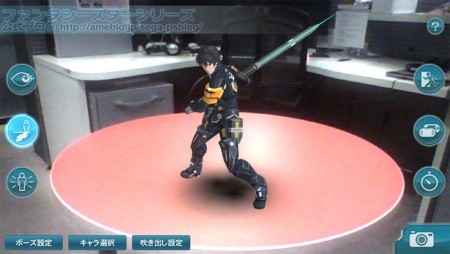 PSO2 Vita is coming with a new feature called "Character Portrait" that allows you to take pictures alongside your character. Using the camera on your PlayStation Vita, you can set up a scene for your character to perform various animations and poses in real life. At the Visiphone in the Arks lobby, there will be a menu that allows you to save your character onto your memory card. Your character's hairstyles, accessories, clothes, etc, are all included in the save file. You can use your own character, your NPC partner characters, or the 6 default characters from PSO2. 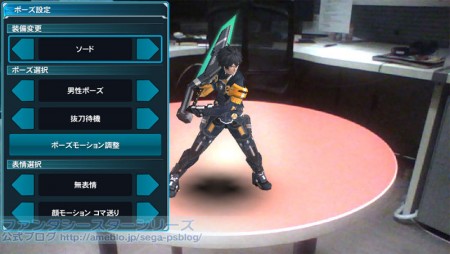 When you're taking pictures, you can set the facial expression, animations, and phrases your character will say. Animations include walking, running, holding their weapon, and other basic lobby actions. 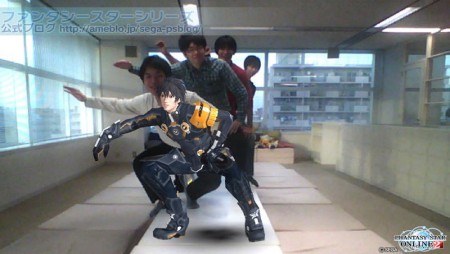 You can take pretty nifty pictures by changing the camera angle.

By the way, you can use Character Creation and Character Portrait offline. In fact, character portrait will be featured in an upcoming TV commercial for PSO2 Vita.

Another set of bugs released along with this week's update. Sakai plans to deliver some form of an apology for those recent bugs that seem to accompany the maintenance patches. For now, here's a list of gameplay changes that are up for consideration.

I want the costume names easier to read.

I want Premium Users to be able to go into a full block.

The Aesthetic Counter Pass should allow for multiple uses over a period of time.

I want to be able to do multiple matter board objectives at the same time.

What about Hunter Balance Adjustments?

CO items that continue to drop after a client order has expired.

It takes a while for the My Shop search results to load.

The Music doesn't change during battle.