Some of the information in this guide is out of date.

Equipment Extend allows you to overwrite the base stats of weapons and units. Even weapons with low base stats can become quite powerful. In order to extend an item, you'll need several materials and meseta. You can obtain these materials through Item Desynthesis.

Choose one of the available crafting lines to extend your items and note the recipe information. 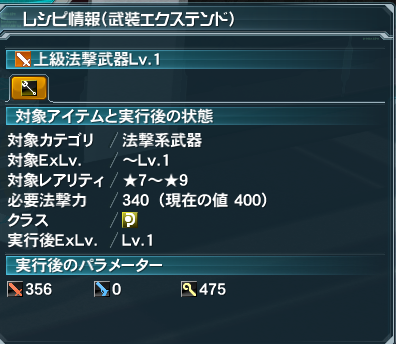 The Recipe Details pane will list both the required and resulting stats for the item.

The stats shown at the bottom will rewrite the item's base stats.

Each of the recipes for weapon extension follow a particular nomenclature.

Beginner, Intermediate, and Advanced recipes apply to a specific range of rarities.

The stats on a crafted item are based on the level of the crafting recipe. Please take note of the following situations:

Base S-ATK for Striking Weapons at Max Extend Levels

Base R-ATK for Range Weapons at Max Extend Levels

Base T-ATK for Tech Weapons at Max Extend Levels

These are the highest levels discovered as of January 15th, 2014. Sega plans to add more recipes in the future. As to their effects, that remains to be seen. 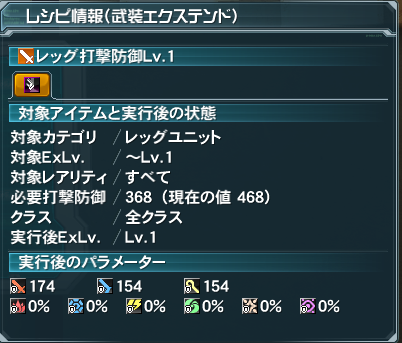 Units on the other hand are separated into arms, legs, and rear, and are categorized by striking/range/tech defense. Though the final results for all recipes are the same values, you can change the required equipping stat based on the chosen defense type.

The stats shown at the bottom will rewrite the item's base stats.

As previously mentioned, the unit recipes are categorized by striking/range/tech defense. This alters the stats needed to equip the item. For example, if you chose a "Rear Striking Defense" recipe on a unit that typically requires "Range Defense", it will change that unit's requirements to "Striking Defense."

Before you craft a unit, please be aware of the following:

In order to unlock new recipes you must craft an item several times. There exists a form of progression that unlocks recipes by their categories. (This is indicated below as [A] → [B]). For example, after [A] crafting a ★1-3 Striking weapon five times, you can unlock higher level beginner crafting recipes. Then you can work towards [B] crafting ★1-3 striking weapon 25 times at Extend Level 7+ to gain an achievement.

You can jump around to Tech and Range weapons and unlock recipes in their particular rarity brackets. Jumping around unlocks achievements faster which helps to increase your craft level.

Tech Customization allows you to alter the performance of a technic. From its power and speed, to its hit number and range. When you craft a technic, it creates a "Custom Disk" giving you the option to overwrite a particular technic's performance. But there's a sinister threat lurking within customized technics… 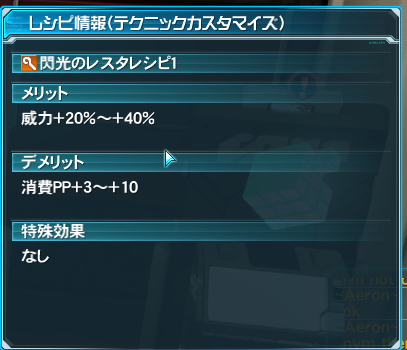 Custom Technics have both positive and negative attributes, known as "Merits" and "Demerits." Merits can contain bonuses like increased speed or power. Demerits, on the other hand, can increase PP costs or charging times among other things. Merit and Demerit values are chosen at random, thus, it can create situations where the negative effects outweigh the positive.

Custom Technics also have special effects that may increase the status inflicting rate, increase the firing speed of technics, among other things.

Technic Customization has two outcomes; you can either Succeed (成功) or Greatly Succeed (大成功). If you achieve the latter, you'll receive better outcomes for your Merit and Demerit values. 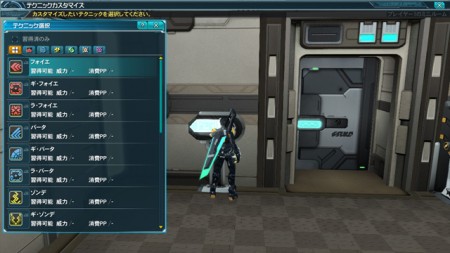 To craft a technic, first select the Technic Customization menu (explained at the top of this post), select a crafting slot, and choose the available technic recipes. You can gain more recipes through crafting and unlocking achievements.

Crafted technics are sent to your inventory, giving you the option to decide whether or not to apply it. But before you do that, please take note of the following:

As of January 15th, 2014 there are two recipes for each technic. Each Technic Recipe follows the  [prefix] [technic] [recipe#] nomenclature.

The Recipe prefix is a fancy way of indicating what kind of merits it will have.

Craft an element several times to unlock new recipes of that particular element. If you craft a specific technic five times, you'll unlock an alternate version of that technic.