Thanks to everyone who participated in PSO2’s Closed Beta Test. During the test they had several network problems with disconnections and lag. After some investigation, it was discovered that the main cause of the problem was due to their machine settings. They want to arrange the opportunity to run the test again to make sure the network problems do not occur in the Open Beta Test. So the next test will be called the “Pre-Open Beta Test“. Unfortunately he can not announce the exact schedule at this time but this Pre-Open beta Test starts in late June.

From the Open Beta Test, he will collect feedback and reports and assemble a list of responses based on them.

He thinks there’s still some ways to go and aims to make the game as enjoyable as possible.

The blue bar represents simultaneous connections while the red bar shows logged in users each day.

The number of simultaneous connections is quite low, this is due to the network troubles that occurred on the server. Also he believes since you were generally able to connect at anytime during the day (compared to previous alpha tests), less people decided to log in at the same time.

Interestingly (or uninterestingly…) the ratio is about the same as Alpha Test 2. 70% of players play as Female characters. He guesses women play an active role in the Arks.

Per each race and sex, the most popular hairstyles and outfits are:

The most popular hairstyle seems to be Casual Layer.

Each person would make an average of 1.7 characters.

Compared to last time, there were less feedback and requests, but there were more bug reports and BBS posts.

There were about 37,000 submissions to the survey.

Whether or not they participated in previous tests:

Whether or not they will pay cash items and play the game when it officially starts: 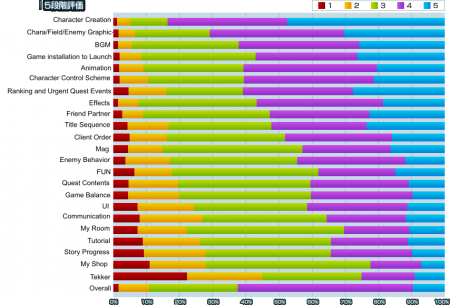 What systems people will play PSO2 on: 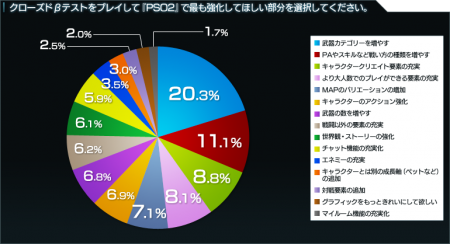 This asks which aspect should be strengthened the most.

Again like in Alpha Test 2, “increase weapon categories” was the most requested.  In second place just like last time, people want more PA and Skills. It seems many of you wanted them to improve the action portions of the game.

Sakai updated his blog but most of it is covered in the closed beta test report. However we get some insight on a few things. The next test isn’t a Closed Beta Test 2, there are no restrictions on the amount of people that can play. Thus, their next test is called the “Pre-Open Beta Test!” Though the data of the Pre-Open Beta Test cannot be carried over to the Open Beta test, those that participate will get special gift. The details about this gift will be announced in the future.

Due to server problems, the maximum number of simultaneous connections in the Closed Beta Test barely passed over Alpha Test 2’s. One of their biggest objectives in the Pre-Open Beta Test is to see if they have solved this problem.

You’ll have to wait about 1 month until the next test starts. Please stay tuned for news and future information when it’s available.