In a recent Famitsu magazine, Sakai has announced a new feature called the "Weapon Camouflage System," which allows you to camouflage your weapon into another weapon. Shougai comments how this feature could be useful for those magazine /nacht weapons which have a tendency to be very weak. 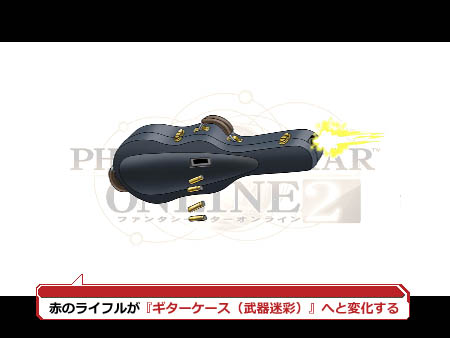 In the example they gave,  you can apply the Guitar Case Weapon Camouflage onto a Red Rifle. Though its appearance may have changed, its stats are left untouched.

Shougai commented that if they allow you to do pre-existing weapons, you could have the Mehren Nenka (double saber) look like a Gwanahdouble.

Basically, this Camouflage system is like Mag Evolution Devices for weapons, but only in that it changes the weapon's physical appearance.

Unfortunately, we have no idea on what enables you to trade these items, but we're pretty sure you could make an educated guess around here. We do not have a time frame as to when this feature would be enabled.