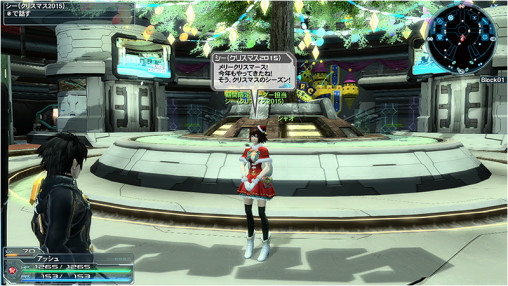 The Christmas season is finally here and to celebrate, Sega is implementing this year's Christmas lobby! More beautifully illuminated than ever, the lobby features even more festive decorations.

Sensing Christmas approaching, Xie comes dashing through the snow to offer a new set of client orders! Complete them to receive the frosty [＊Snow Cannon Man ] weapon camo for launchers.

The Christmas 2015 Bingo joins her with objectives perfect for the fourth edition of the Merry Christmas on Ice quest. Players will be rewarded with presents like boosters and the [＊Ixschrayla ] gunslash weapon camo for advancing through the bingo card. 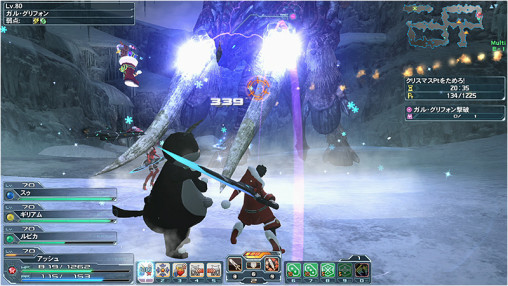 The seasonal [Merry Christmas on Ice 4] Emergency Quest returns with a new installment! Various Toy Darkers will be encountered alongside the Tundra's natives, with frequent appearances by Falz Douran and Dorill. Nyau will also appear, capable of summoning Gal Gryphon onto the field.

Dio Hunar makes its debut in battle form, tormenting players with attacks more fearsome than Viel. Upon defeat, it may drop Phantasmal Ares Stones used in trading at the Pyroxene Exchange Shop for Ares series weapons. 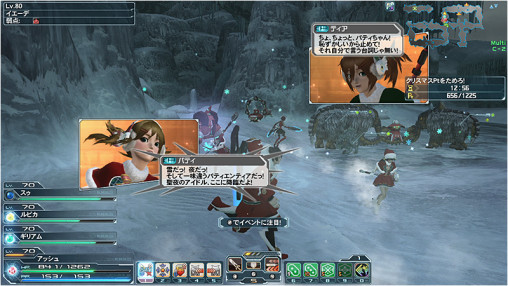 This chapter introduces Aurora, a mysterious girl who claims to be the “Original" Apprentice. Her sudden arrival prompts Afin and Euclita to travel around Lillipa to investigate the reason why she appeared. They arrived at the Corrupted Region, but Aurora, sensing something inside, advances forward ignoring the attempts to stop her.

In collaboration with Nihon Falcom's [Legend of Heroes: Sen no Kiseki II] comes the costumes, hairstyles, and weapons of characters Rean, Alisa, Laura, and Fie! Get festive with one of the new Christmas costumes, or don the moody dark coat joining the scratch.

※ Looking for naming suggestions for the Bingo's Gunslash Camo.