Good Morning, Today Bonkohara released an email newsletter revealing on July 26th, Sega will hold a media briefing for Phantasy Star Online 2. This media briefing will talk about the setting, concept, and races for PSO2. As such, Sakai will give a presentation showing off PSO2 and will release information on the official site and related sites when ready.

With much pleading by Bonkohara, Sakai has allowed us to watch the event on Nico Nico Douga. (You'll need a Nico Nico Douga account if you want to watch any videos from that site). Please check out Sakai's blog on the 25th for information about the broadcast.

UPDATE! According to Sakai's blog, "PSO2 content that has been shrouded in mystery, will finally become clear! Please look forward to this briefing because a large amount of information will be shown."

So that HUnewearl in the previous email newsletter, did you notice something? You remembered her weapons?

Well in these images below, Bunkohara has each player character use a name from PSO. However there are no NPCs from PSO in this game.

PSO2 now has a new weapon category making its debut, check it out! 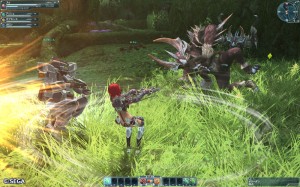 Here's Sue (in a blue name) throwing an enemy around. You can use this weapon to attack an enemy from a distance. Also in the screenshot, there's Hopkins next to her. This guy looks similar to a gorilla type enemy from the Forest. Kind of like the Hildebear, but that's not his name.  Such big hands, why he could throw someone with that. His size is considerably large, it would make more sense to compare his height by checking out the last image. 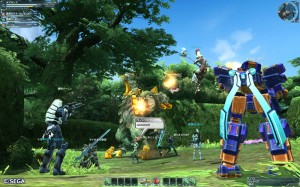 See he's quite big, but there's… there's… 1,2,3,4,5,6,7…8? Hmm somehow there's a lot of people fighting this one enemy. (According to the screenshot, this enemy is called RockBear) 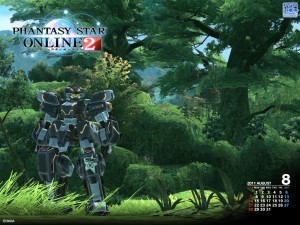 Who the hell are these people? (Speculation) 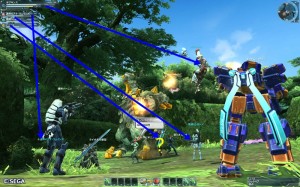 A lingering  mystery is this screenshot that displays 9 (maybe 10) characters all together on one screen fighting one enemy. Leading us to wonder whether these are actual players or NPCs joining the party.

Point: Taking a look at the trailer we noticed all players within the party have blue names. Although, Sonic himself has a yellow name. When an interrupt event occurs, Dynal crash lands to the ground, his name appears in white.

Perhaps the white names are NPCs and that screenshot is an interrupt event?

Counterpoint: In the usual fashion, whenever NPCs join your party, they appear with their name on the side. This has been a series staple ever since the days of PSO. Not only that, when Dynal spoke, his face appeared next to his name and his text box was purple. The character speaking, "Karen T Beginning" has no facial portrait and appears as a generic grey box. Most but not all the characters displayed in the screenshot have some extra addition to their name, like Shino's (blue) name is "Magnificent Shino" while Lionel (white) is called "Lionel New Type" or "Lionel New Model." Someone would physically have to input such a name unless PSO2 understands inside jokes.

So far we've been shown parties of 4 characters, but this other team would have 5 characters. Perhaps it is three parties with 2, 3, and 4 members.

What do you think?

Previously Bonkohara gave hints that the RACast can perform some type of special movement. We (JP/EN Community) made educated guesses that it may have something to do with Jump/Hover or Boosting of some sort. In this latest screenshot the RACast appears engaged in a different pose, with his knees bent, and some kind of orange spark behind him. Do these orange sparks indicate dashing or is it from the HUnewearl's swing?

Well if it is the former, we believe he can dash and skate kind of  like those Sinow Hidoki in PSP2. Otherwise he has just landed from a jump.

I remembered that whole flack I got about writing how Sakai wanted those that don't usually play PC games, which ended up sounding like PSO2 was for consoles. Aiye. Though in my head I was sure he was referring to playing PSO2  on the PC with a USB Game Pad Controller.

Dark Sun, came up with something plausible, the L means Left Mouse Button, R is Right Mouse button. (The center button says Shift, so we'd use the keyboard to move and perform an action, while we use the mouse to attack and move the camera maybe.)