The Summer Event concludes with August 26th’s maintenance and update.

The missing menu button has been a well-known issue that has plagued OTP users for years. To help combat this problem, Third Networks has decided to release “SecureOTP2,” a new application with its own menu button embedded right on the screen! This revolutionary new feature should help ease the pain for Android 5.0+ and beyond. You can download this app for free on the Google Play Store.

If you are a current user and have no problems with the original SecureOTP application, then there is no need for you to upgrade to SecureOTP2. However, those who wish to create a new One Time Password with future Android versions, should install SecureOTP2 instead.

The One-time Password guide has been updated with SecureOTP2 as the baseline for the instructions.

In collaboration with Sweets Paradise, SEGA launched the ARKS Café on July 17th ~ September 30th. A variety of PSO2-themed dishes are served, and customers who order from the Collaboration Menu can receive item codes for a set of in-game goodies!

Please note that some codes can be redeemed only after a certain date.

These items will be available after August 26th’s maintenance.

Phantasy Star Online 2 is holding yet another Twitter campaign! To celebrate the release of the recent TV commercial, PSO2 will be handing out prizes based on the number of retweets received during the campaign period. Players can participate by retweeting the tweets that contain 【RTで報酬GET！ 第2弾】 in the text. The total number of retweets tallied will unlock the prizes listed below.

Usually the tweet is pinned to the top of the page.

With both boosts combined, we can achieve a +150% EXP/Rare Drop boost by reaching 40,000 Retweets.

You can get your hands on the exclusive [it-tells Rappy Suit] by participating in the following campaign!

(1a) Register your account on it-tells and join the community.

Both (1a) and (1b) need to be satisfied to qualify for the it-tells Rappy Suit.

Head to the it-tells official site and enter your SEGA ID and パスワード PASSWORD in the two fields to the right. Push the orange ロギィン Login button to sign on. If you already have an it-tells user account, you can skip Step 2. 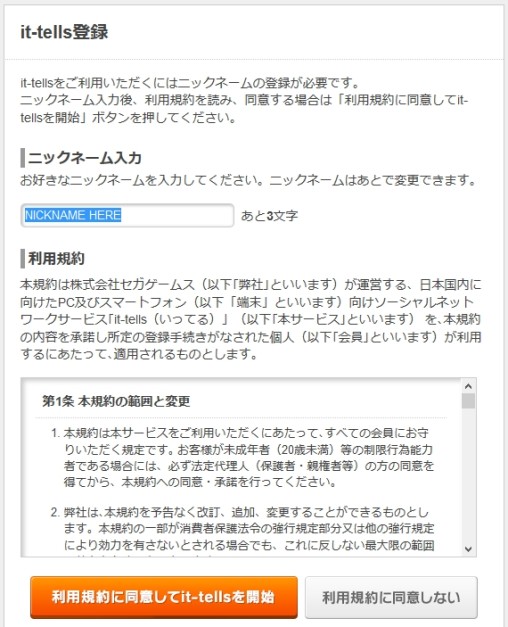 On the registration page, you can enter your it-tells username (referred on this page as a ニックネーム nickname). Click the big orange button below to agree to the User Agreement.

After signing in, you’ll reach the “Profile” page allowing you to fill in information or add an avatar. But for the sake of this tutorial, you will need to visit the “it-tells x PSO2 Campaign” page to qualify for the Rappy Suit.

Click on the orange button to the right to join the community.
コミュニティに参加

Two dialog boxes will appear, push [はい] and then [OK] to complete the process. Afterwards, the bright orange button on the page should turn brown, indicating you’ve successfully joined the community.

Those who’ve satisfied both requirements will receive this Rappy Suit in Mid-October.

Complete the selected client orders for Revelle and Kressida before next week’s maintenance to receive rewards!