After spending several weeks in the sky, we shift over to the sands below. The second half of the 6th Anniversary Event transports us to the Quarry of Planet Lillipa. Here in Sand Park Arkuma Land, we'll encounter Mechs, Demons, and Phantoms, with a special guest appearance from Omega Apprezina! Defeat her for the chance to receive the ★14 Twin Daggers [Appress Grudge Omega].

Summoners are also in for a special treat, as Popple, Aero, and Jinga's ★14 eggs have a chance to drop in this quest.

Similar to the previous quest, players who wear specific costumes will be granted with a PSE effect that slightly boosts the EXP and Rare Drop Rate. 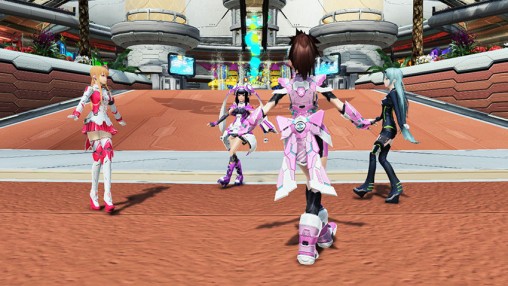 Certain products in the 6th Anniversary Exchange Shop will be replaced with new items.

Ahead of Border Break's PS4 release is a collaboration scratch filled with costumes, camos, and cast parts! Dress up like Hati and her mech [Bright Star Type-0] as you pulverize enemies with their signature weapon ＊CE-Kutune Shirka! Other items outside of the collaboration will cover colorful punk inspired Japanese outfits, and Black Knight themed layered wear.

＊Some outfit names will be shortened to fit the allotted space.