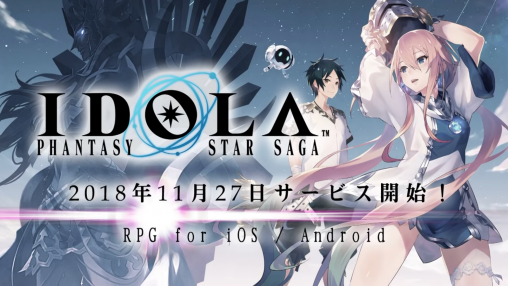 Virtual YouTuber, "Popona," has announced the release date for IDOLA Phantasy Star Saga! The game is expected to launch on iOS and Android devices on November 27th, 2018!

To celebrate the game's release, Popona will be giving out some IDOLA swag to those who follow and retweet specific messages on Twitter. Since these are physical items, we recommend not participating in the campaign unless you live in Japan.

Five lucky winners will each win one of the prizes listed below:

In addition to this announcement marks the official closing date of the Idola Pre-Registration Campaign. If you are a Phantasy Star Online 2 player and wish to receive the pre-registration rewards of 100 Star Gems, 50 King's Crests, and 100 Conqueror's Crests, you have until November 26th @ 12:00 JST to complete the registration form.

ポッポ～♪ Popona is the official spokesperson of IDOLA Phantasy Star Saga. You can learn more about her and the game at the Idola Channel.

We have covered several different aspects of the game already on this site.