At CEDEC 2012, Sega Research And Development Team (including PSO2 sound director Hideaki Kobayashi) discussed the concepts behind how PSO2’s music is procedurally generated.

This process is done through an in-house program they call “SYMPATHY.” It allows them to dynamically change the music back and forth depending on the situation.

Now this kind of article discusses the concepts behind the music which can make it somewhat hard to understand. So if you are not a music major, you’ll have to brush up on certain music terms. 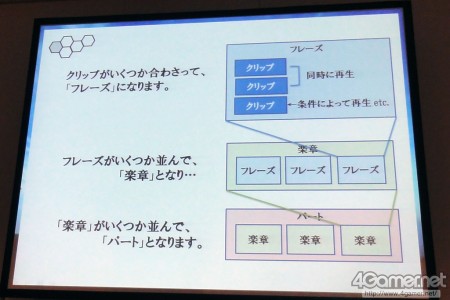 In the slide above, if you check out the right side of the pic, each large box is a subsection of the box below. So several clips make up a phrase, a line of phrases make up a movement, a line of movements make up a “part.” 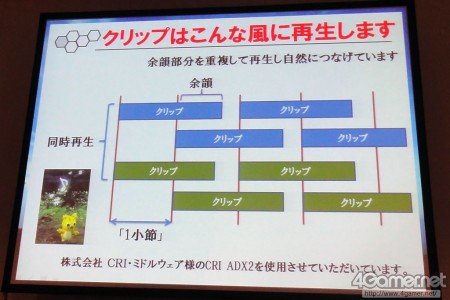 Clips are the length of 1 bar of music plus reverberation. Basically each clip will fade into the other clip. PSO2 can have several thousands of these clips and the Sympathy system can arrange it all.

There are various clips that contain different components of the song. A clip can consist of the “rhythm section”, the “melody” and “sound effects” etc. 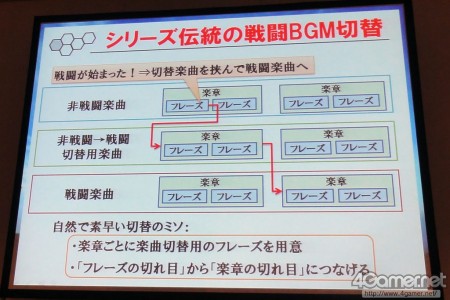 PSO2’s music system has even evolved from its previous counterparts. For example, in PSO1, after the battle portion of the music ends, and you immediately encounter a different enemy, the non-battle music would play for a while.

In PSO2, there’s another musical piece known as the “Sudden Battle Music” that can be inserted mid-way. 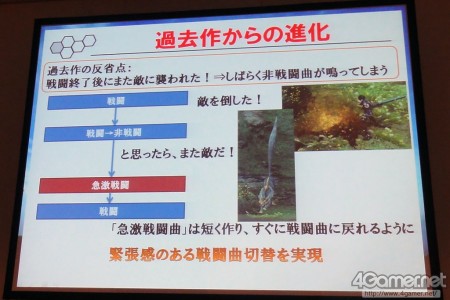 There’s three main points to SYMPATHY’s music system. For one, its intent is to prevent the player from losing interest. Since they will play similar quests multiple times, they may lose interest when the same BGM is played over and over. The SYMPATHY music system allows them to play a different BGM every time. We can illustrate this in the next slide. 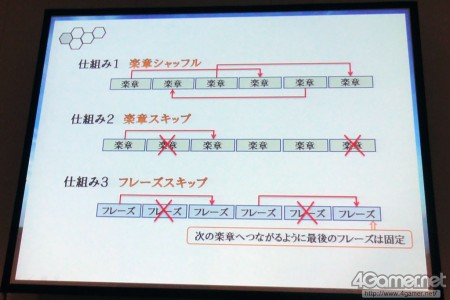 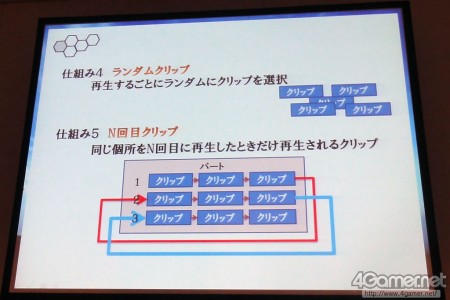 They can even choose clips at random, and also prevent the same clips in succession from being chosen when a part of the song is looped. (It could play one set of clips, then loop, play another set of clips, etc..) 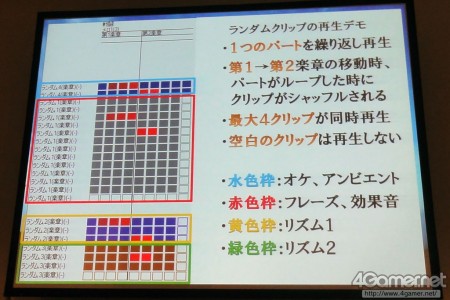 This slide shows an example of Sega’s Symphony Music Editor.  The boxes are clips, the red boxes are clips currently chosen to be played. When a part of the song is looped, the clips get shuffled.  The red frame is the sound effects,  the yellow and green frames are rhythm portions.

The second point of Sympathy is for the player to experience the climax of the BGM. (But not in that way you’re probably thinking… ) Basically the BGM changes depending on the situation. This is calculated through three parameters, “Hero,” “Pinch,” and “Climax.” 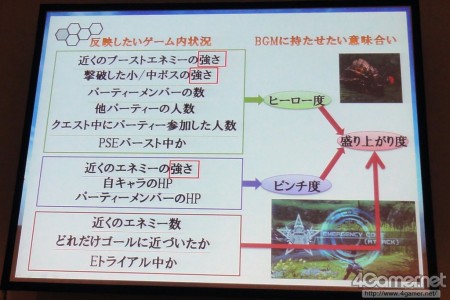 According to this slide, a number of things can affect these parameters. For example, the  Hero score is affected by things like PSE BURST, the number of people in your party and other parties, the mid boss enemy strength, and boost enemy strength.

The number of nearby enemies, how long until you reach the goal, and emergency trials factors into the Climax score. 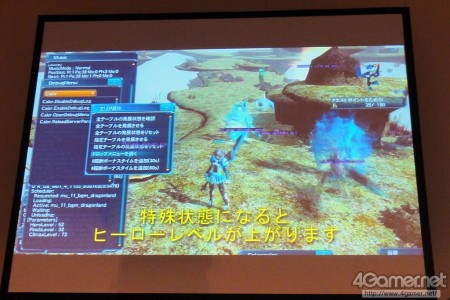 This lovely debug window shows the three scores which are updated in real-time to affect the BGM.

When you surpass a particular level in each parameter, that parameter’s music gains priority. For example, when your hero levels are high enough, you’ll hear clips that only play during that mode. Same goes for Pinch, you’ll hear music specifically for that situation.

Another way to illustrate it, normally you’ll hear the rhythm and melody clips playing, when you acquire hero mode, the melody track is dropped and instead plays the hero clips. If you are in pinch mode, all tracks are dropped and only the pinch clip plays. The Boss music is dynamic too. For example, you’ll hear the normal boss music when you encounter the boss, but if you happen to take down one of its legs, another set of clips will play.

The third concept was a little bit hard to understand but the gist was that even though the music is played at random, everything should sound like one musical composition. Meaning each section should still sound like it’s from the same song, and these sections should connect and reference each other.

Even in pop music, as the song moves forward, the previous theme is referenced. Sympathy does this automatically.  The phrase used at the beginning of a section is referenced in the next section. 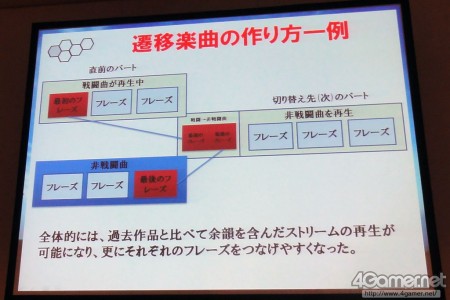 [info and pics via 4gamer]