TGS Grande Finale! Sakai, Kimura, Sugenuma, Mashiyama did a question and answer session from the fans. Today's post will combine information gathered by 4Gamer and Famitsu that covers the 3rd and final day of TGS. 4Gamer also updated their page so some information has been added.

The QA Session gives you a glimpse of concepts and ideas the developers are thinking about.

One of the questions brought up the concern over whether you'll be able to charge technics through the touch screen. Since the Vita version is still in development, for now it doesn't support this feature. They'd like to try having it available for the official release.

The next question wondered whether the Vita version will support custom button configurations like the PC version. It may not be possible to do all the buttons, but for some of them they could let you try customizing them. They'll also think about having menu shortcuts via touchscreen. 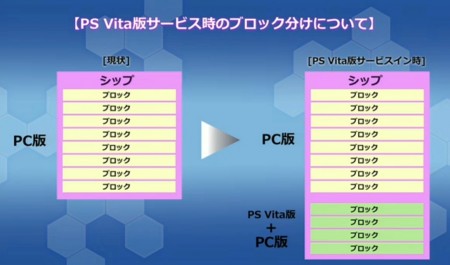 Vita and PC players can play together in the same ship, but only certain blocks are designated for them. This chart above shows you the basic layout on how blocks will be set up.  Vita+PC blocks are green, and PC exclusive blocks are light yellow. The Vita version also supports teams, and just like before, you can see the team chat no matter what block you are on. 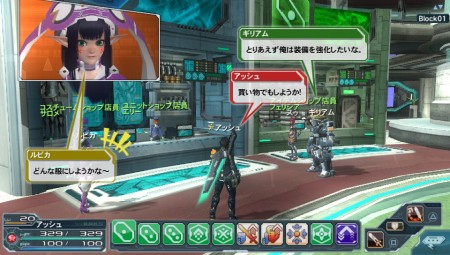 Unfortunately, you can have one account per memory card since the Playstation Network account is tied to the memory card. If you want to sign in under another account, you have to get another memory card. Certainly you can purchase multiple characters under the same account with Arks Cash.

You can download and play the game for FREE from the PlayStation Store. One question asked if you can play PSO2 offline, but this version of the game is also exclusively online.

They hope they can set up national gaming events like the Infinity Grand Prix for both PC and Vita players but it is currently undecided.

There was a question that asked if it was true that when you evolve your mag it transforms into a girl. Though it looks like the person who asked confused mags with PSU's partner Machines, they said if there were enough demand they could implement it.

Previous AC Scratch content will return but you may see some changes, this could be something like a slightly different color variation or upgrades. 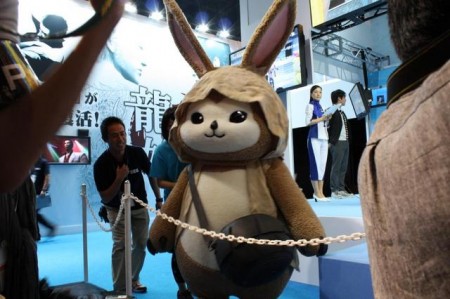 When asked if there's going to be a Lillipa Suit, they said they'll do it.

For subclasses, you get all passive and active skills, but know that certain skills are dependent on the weapon category. For example, weak bullet will need Assault Rifles to use that skill. Some things won't apply, like if you were using a wand, you can't perform a step attack. They will even add more weapons that can be used by all classes just in time for the subclass update. According to 4gamer, in addition to that 20% stat boost you inherit from your subclass, your "stat up" passive skills are applied 100%.

They want to improve the game in various ways but particularly the quest counter and how you meet up with other parties. They haven't decided yet on how they want to do it, but they want to address things like how you can't enter the party because its full since other players brought NPCs or something. For example: An idea could be to change the quest counter rules for each block. (Comment: Like you won't be able to invite NPCs on a certain block.)

They have already started concepts on new weapon categories and classes.