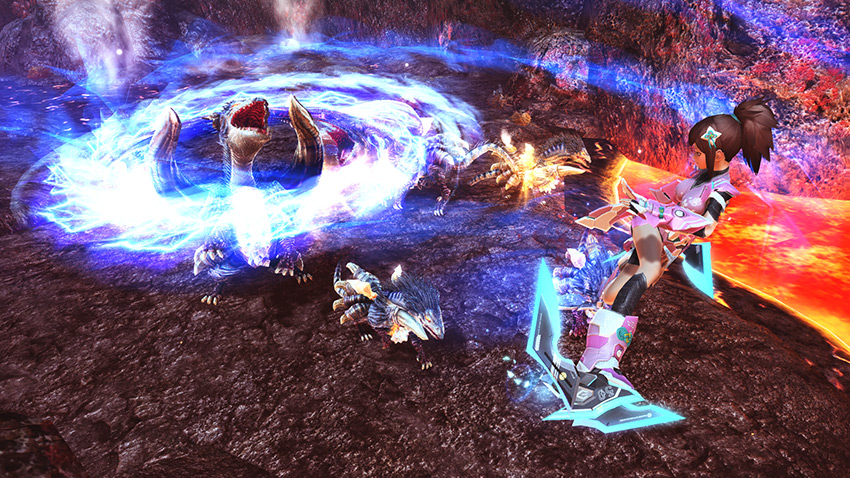 Kick up a storm with the new [Tempest Raid] Complex PA for Jet Boots! Follow up its rapid stun strike by hurling a series of circular shockwaves at your foes, or propel forward and deliver a high kick by shifting. The first ★13 Units have arrived, and can uniquely be given S-Class Abilities in addition to unit skills. Like weapons, it is possible for them to drop with an S-Class Ability pre-installed. Otherwise they can be added at the Item Lab using a special material. Additionally, you can transfer them to another unit of the same rarity. Zieg will carry the ★13 Schvelle series units in his shop. You'll have to trade in a Cleasis unit and 30 [Schvelle Boosters], the latter of which can be acquired through Buster Quests and Enchanted Forest Exploration. Cleasis Boosters can also be exchanged for Schvelle Boosters. As an A.I.S unit commences an operation to assail the occupied Mothership, a lone Shiva comes forth to halt their advance.

See what Klariskrays and Ko Rera are on about, check on Kyokuya's sweep of Darkers, and meet Pietoro's latest pet in a series of new sub-stories. Commemorate the October 7th premiere of the PSO2 Episode Oracle anime series with a new Web Panel Event! Repeatedly clear the target quest to earn points towards unlocking panels. Make sure to participate and enjoy all the wonderful prizes we unlock.

Hostile creatures are making a mess at the site of this year's Halloween celebration! Take to the Quarry and mop them up with the help of some well-placed energy tanks and mounted guns. Deos Gryphon is waiting in the final area, and can drop the ★15 [Shiho Seiryu] wired lance. Remember to slip on a Halloween costume for a "Costume Bonus" PSE effect that slightly increases the experience and rare drop rates.

Get out there and hunt for the new ★14 [Sign Burn] gunslash and Latan Rappy Suit Mini costume that can drop during the quest! Not one to miss out on the Halloween fun, Xie makes a return to the lobby. Help with her preparations by clearing her client orders and receive weapons badges as compensation. An all-new set of limited time ARKS Missions arrives with awesome prizes, including Leontina Certificates and a [V Hunter] evolution device for your Mag. The Trick or Treat '19 collections add the [Glorious Parfait] wired lance and have ★14 S Eggs. View a listing of the most popular My Shop items from the Visiphone. The Options menu will sport a cleaner design, along with the addition of a dedicated window for explaining the specifics of each setting. The max number of characters one can have per account has been increased to 30. The preset character designs available during creation have received a makeover. Fine-tune the camera speed when using a mouse with a new setting. The ★14 Sign Burn weapon will be included in the Special Collection.

The following weapons will support the [Plus] potential, unlockable with an Ultimate Booster: Sgt. Frog collaboration items are heading to the Recycle Shop 2! The [Encounter Persona] story event from Episode 1 is now a playable quest, featuring a battle against Persona!

Any five Bonus Keys with an expiration date of October 2nd, 2019 (@14:00 JST) or later can be traded at the Recycle Shop for a single Bonus Key Tokyo [Gold].

Treat yourself this Halloween season to two boo-tiful new outfits inspired by the tale of Little Red Riding Hood! Then work off all that candy with new gym themed layered wear.

24 thoughts to “The First ★13 Units Arrive in the Form of the Schvelle Series!”