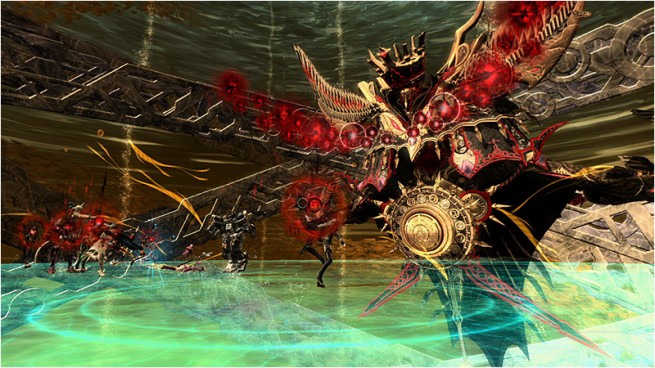 Today, Sakai wanted to answer some questions concerning the new Dark Falz! You may have noticed that the annihilation rate—shown at the top part of the screen—increases after defeating Apos Dorios. This system is set up in a way so that the percentage counts towards the rare drop rate.  In other words, if the annihilation rate is 145%, then the second phase will apply a [+145% Rare Drop Rate]. The highest annihilation rate you can achieve is 200%, and as of May 16th, 2014, none of the ships so far have made it to that number. He thinks they may have judged the annihilation rate too harshly, so they’re thinking about ways to address it.

In addition, players have noticed another hidden mechanic in the drop system. Based on the number of times you defeat Apos Dorios, increases the number of drops in the second phase. However, you just have to defeat four of them to attain that drop number cap. Please take note of this because it increases the burden on the servers when high level players defeat them several times over on low difficulty settings.

In the future, they plan to not only examine the situation with the annihilation rate, but to take small steps in reducing the server load during a pre-scheduled emergency quest.

In other news, the next PSO2 Live Broadcast is scheduled for May 27th. Details will be posted on the official site in the future.