During the Fan Thanks Festa 2011 event Sakai revealed an alpha test for Phantasy Star Online 2. The test will be distributed via a code and users will be randomly selected to participate in the Alpha test. 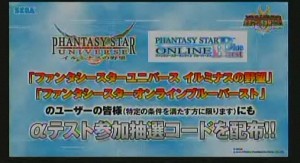 PSU and PSOBB players can also get the code!

The Japanese versions of  Phantasy Star Online Blue Burst and Phantasy Star Universe Ambition of Illuminus can also  receive this code. Players of such games must fulfill a certain requirement.

If you fulfill one of these conditions, you will receive the code via email. This allows you to enter into the drawing for the Alpha Test. Xbox 360 players are excluded from receiving the code. It is only for those who play the Japanese version of Phantasy Star Universe: Ambition of Illuminus.

If you fulfill these conditions, you will receive the code via email. This allows you to enter into the drawing for the Alpha Test. The Hangame version of Phantasy Star Online Blue Burst is excluded from receive this code. 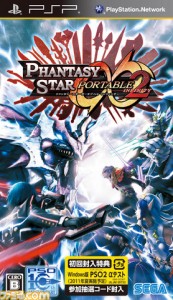 A Message from Sakai

Today Sakai blogged a bit about the Alpha test, not so much about it’s contents but rather the general information on how to get in and what is to be expected. First he’d like you to understand that there are usually four phases of testing games.

They start with the first version, alpha, beta, then the Final version. Data from the Alpha version is not transferred to the Beta. Opinions raised from these tests are used to further complete the game. This makes the testers feel as if they are contributing to the game.

The alpha test is given out to a limited number of participants, so you must satisfy one of the conditions above stated earlier in the post.

During the initial shipments of Phantasy Star Portable 2 Infinity, you can receive the alpha test code. Keep in mind that initial shipments refer mainly to the Pre-Order/Reservation version of the game. It is possible that those who purchase the game on the weekend (after the game is released) may not see the box with the alpha code sticker. Unfortunately this code is not covered by the download version of the game.

For Phantasy Star Universe Ambition of the Illuminus, you have three chances to receive the code. Please take note, you must have access to your email address because this code is distributed once even if you satisfy multiple conditions.  Unfortunately this code is not covered by the XBOX 360 version of the game.

For Phantasy Star Online Blue Burst, code distribution begins on  2/24/2011. This code is not covered by the Hangame version of the game.

Participants with the code are not randomly chosen. Players must submit answers to a questionnaire. This is to see those who can satisfy the minimum requirements of the game. Please keep in mind that candidates for this alpha test are chosen beforehand (based on this questionnaire). For those anticipating the alpha test, we can not show screenshots of the game at this present time, but around spring before the application deadline, we may be able to show it to you through some process.

Please await further instructions regarding the alpha test. In the meantime enjoy the 3rd update for PSU, and play Phantasy Star Portable 2 Infinity.