Sakai wrote a pretty long blog post about the changes and updates coming during the month of February. Here’s a recap.

Advance quests are intended for those level 45+ with enemy levels higher than other quests. When it comes out, it will release with three quests; Forest, Caves, and Desert. Unlike other quests, it requires a currency called “Advance Capsules.”  It looks like they didn’t explain this aspect very well, which seems to be causing a misunderstanding. So here goes…

There will be a client order to help cover the cost of your first advance quest. In addition, there are three types of Advance Capsules; a, b, and c. The capsules needed for Caves can appear in the Forest, and the capsules needed for Desert can appear in Caves. These are very likely to drop within the quest themselves, but if you don’t have enough for the next quest, you can purchase the remaining capsule balance with meseta.

Before the quest starts, the party can decide whether the leader pays for everyone or everyone pays for themselves. Within the quest, expect to see high level enemies and exclusive drops. As you clear the quest, your “Advance Risk” rises which increases the enemy levels and boosted enemy appearance rates.

Furthermore, there are new pyroxene stones that can appear within this quest. You can use them with a specific weapon to trade for a new 10 star weapon at the Pyroxene Shop.

On February 20th, a new interrupt event will have you passing along messages for the Lillipans through Lobby Actions. A Lillipan will perform a gesture,  you must deliver that message to another Lillipan in a different location. There will also be enemies nearby that will frighten the Lillipans, so defeat them as quickly as possible. Sakai suggests that you try doing this event with the Lillipa Suit on.

Adjustments to make it easier to reach level 30.

Input Assistance (Predictive Text) feature for My Shop Searches
Some item names will be easier to understand.

Aesthetics Counter Ticket will enable Premium Users to reuse it for a certain amount of time.

While playing on PC/Vita and Vita Exclusive blocks, the following changes will occur:

Sakai wasn’t originally planning to do Vita exclusive blocks but he wants to accommodate as many Vita users as he can for the release date.

The following changes will be applied as an update when the Vita version launches. Please keep in mind that the offline character creator in the special package version does not have the skin color adjustments applied yet.

Corrected the character skin color / Made the breasts Jiggle

These adjustments will be applied sometime in the future.

Copy and Paste Chat / Symbol Shortcuts / No UI in Screenshots 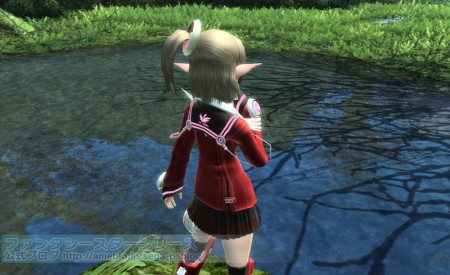