So far we know the Oracle fleet can travel to different planets, but what about a few planets we’re already familiar with. In an interview with Famitsu, Sakai dropped a few hints that we may likely cross the Ragol and Gurhal Solar Systems.

Famitsu asked if PSO2 will have some connection with PSU/PSO. Although Sakai being tight lipped about the whole endeavor he did say that maybe this star fleet could potentially reach Ragol and Gurhal to a degree. (It appears they may have some future plans to add some form of them into the game, but nothing is certain. Though this reminds us of when they wrote how PSPo3 (Victory) should take place in a new setting.)

Each game server is called, “World” and there will be multiple “Worlds” to choose from. Each World is independent from the other, and thus you can not “exchange” with a different world.  When you start the game you choose a world and create a character, but you can make different characters in different worlds. They are considering giving you the ability to move your character into another world (not certain yet.)

For now, there are three races, but there’s a possibility that we could see more.

As you earn EXP, your class level rises, when you level up you acquire “points.” By using these points you can learn class skills, and these class skills are for your current class. You can not use a class skill designated for one class to another. Even if you reach the maximum level you can not acquire all the skills. So you should choose the skills that you want. They are considering plans to be able to redoing your skill tree.

Wired lance: You can’t throw the larger sized enemies. According to Dengeki, the Wired Lance can do something else other than flinging enemies, it can tear off a part of the body. Perhaps you may have to rip parts of enemy’s armor to expose its weak point? [shougai]

Rod: You can link 3 kinds of techs, and for the linked techs you can charge them. For example; by charging, the power of the technic changes, the effective range changes, and the effect changes. However the PP consumed does not change with a charged Technic.

Technics: You learn them by acquiring the disk. But each disk has a stat requirement in order for you to learn it, say for example, you need atleast 50TEC to learn this technic. There are no limits to the number of Techs you can learn. They are considering whether you should be able to transfer techs to other players. High level disks are dropped by enemies, low level disks can be obtained in tutorials and such.

Jump: During a jump you can perform a normal attack, just attack, or photon art. During a jump the original combo and techs behavior will change (for example the range of the attack). There are some enemies where you can only jump on their backs if they have collapsed, however some other enemies will allow you to jump on them while they are standing.

Original Combo: You can set up the first / second / and third photon art to perform your original combo. Like; 1: Tornado Break 2: Spinning Break 3: Gravity Dance. It’s even possible to weave in normal attacks. 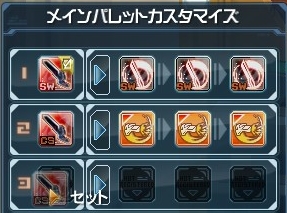 Makes sense now does it!

Interrupt Event: There will also be “rare events” as well the usual random events. The enemy level may suddenly change and can create for a more difficult battle, but if you fail the conditions of the interrupt event, you will receive no penalty. You will receive reward items for successfully completing it.

Incapacitation: The end result grade will drop based on the amount of incapacitation one has. Each result is independent from the other player. So if Player A dies many times, it won’t affect the results of Player B who didn’t die.

Photon Sensitive Effect: When you continuously defeat enemies your PSE  has a chance of activating. When this happens your EXP, Drop Rate, and Meseta rate can increase. If you acquire an “Evolution Drop” from an enemy you can get even more bonuses applied to your EXP, Drop Rate, and Meseta. If PSE occurs consecutively, you can get a PSE Burst which increases the drop rate and the number of enemies that appears in a huge amount. PSE Burst can be extended by killing more enemies.

Multiparty: You can have multiple players up to 12 participate. But they don’t necessarily have to be 3 parties of 4 people. It can be 12 parties of 1 person. You can also set up and shuffle the parties each member is in at the area, so If I’m in party A, I can be shuffled to party C. While you are in a multiparty area, your support technic only applies to your own party, but some technics from other parties can affect your party. (No details about which Technics yet.)

Drop Items: Each player sees their own drops, the system is similar to PSZero and PSP2i.

Units: You can have units for the arm, back, and leg. Some things can be used as an additional part for the costume, so when you equip it you may see a visual change. These units can do things like increase defense and attribute rate.

Mags: Mags are back but they will not be shown in the Alpha test. Details about them are unknown.

EXP: It is applied when you are within the viewing range of the enemy. If you are too far away you will not get EXP.

Reincarnation: At present this feature does not exist, it may occur in the future but details are unknown.

Visual Lobby: Events and related information will appear on signboard, there will be a theater which is just a huge screen, and it will play videos too.

My Room: They will return but not much details about it for now.