Sakai updated today about his first trip to Korea and the second revolution as explained below. I’m guessing you shouldn’t expect much new information until he’s finished with these three revolutions.

The idea of this revolution started by asking if it was possible to take the same level of action from console games and place them into an Online RPG. Even though the Phantasy Star series has added action characteristics like Guard and Evasion, PSO2 has finally added the ability to Jump to the table. 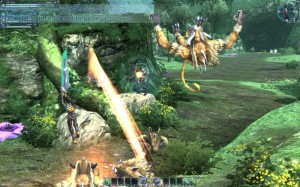 By introducing Jump, different gameplay tactics can be utilized. You can jump and attack aerial enemies and can even give the final blow while in the air. You can also jump on higher terrain to snipe at enemies. 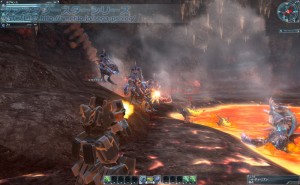 The game also for the first time in the series utilizes a Third Person Shooter mechanic known as TPS Style. Now you’re able to move freely while shooting. In addition you can aim precisely at an enemy’s weakpoint during battle, or even shoot at eggs the enemies drop from the sky.

PSO2 also has three classes which have a characteristic that’s different from each other. In particular, the urgent evasion (how you evade attacks), is distinct by each class.

The Hunter class is for close combat and their evasive maneuver is called “Step.” It allows them to reach behind the enemy very quickly.

Rangers are for mid-range combat and they focus mainly on shooting weapons. Rangers use special bullets to help out Hunters, and provide backup support for the entire party. Their evasion is called the “Dive Roll”, allowing them to leap out of the way.

Forces are for long range combat, they have various roles like support, attack, and recovery. Forces have an evasive maneuver called “Mirage Escape“, which has a longer duration of invincibility.

Your playstyle changes based on each weapon category too. 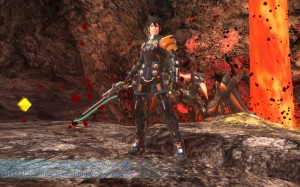 For example, all classes have access to the Gunslash, that lets you shoot and attack from the same weapon. 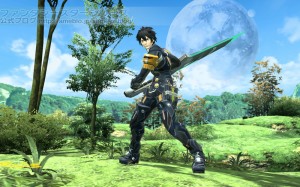 Hunters (at the time of the alpha test) have access to two exclusive weapon categories. Swords can attack surrounding enemies with it’s wide attack range. 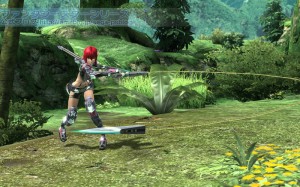 Then there is the Wired Lance that can swing around and throw enemies. 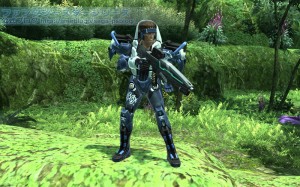 Rangers have exclusive access to the Assault Rifle. It allows them to shoot at long distances, aim for a weakpoint in TPS style, and have access to special bullets. 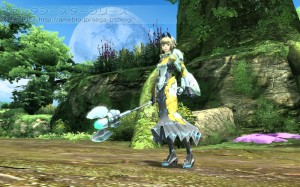 Forces have rods which they can charge, use technics, and do physical attacks striking the enemy with the weapon itself.

Of course these aren’t the only weapon categories for PSO2. What other weapon types will be revealed in the future?

In PSO2, player levels are no more, instead the level of your character is dependent on your class level. By leveling your class, you can apply various skills to open up different features for battle.

PSO2 also allows one to play with keyboard and mouse, or gamepad, but since neither of these methods were fully complete in the first alpha test, you should expect more improvements in these controlling methods for the second alpha test.

Today’s porori images are the starting weapon concepts for PSO2. 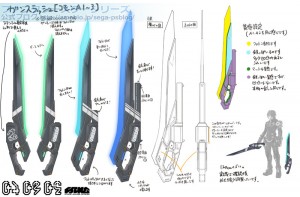 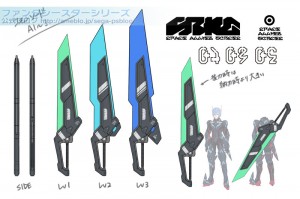 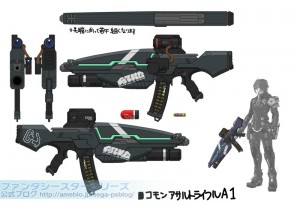 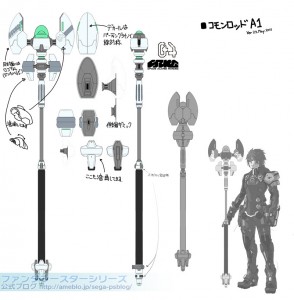 They will become cooler when you acquire rare weapons!

Based on popular demand from Twitter, you are now able to signup for the glorious PSO2 Newsletter for free. You are required to have a SEGA ID, so please use the SEGA ID Signup page if you don’t already have one. Please Note: You will need to have basic knowledge of Katakana to sign into the PSO2 Newsletter page.  Those that sign up will also be randomly selected for a spot in the 2nd Alpha Test.

Last Wednesday through Saturday, Sakai took a trip with PSO2 Director Kimura to Korea. They set up their booth at G*Star, a Korean Online Games Show. But wait? Is PSO2 announced for Korea? I’m sure it looks this way at first glance but actually this was just an exhibition. Sakai states that currently they have not yet decided if they will release the game in Korea. And even so, the game hasn’t even officially released yet in Japan. 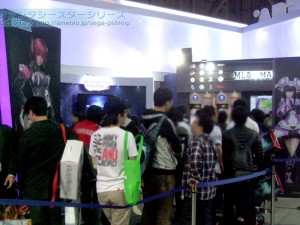 The booth was quite small, they only had 8 stations available, so there were many people waiting in lines. 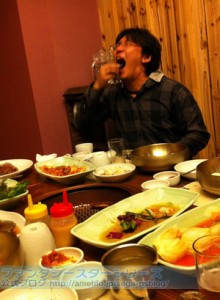