The eruption of aether engulfing the moon’s surface has materialized in the form of ESCA Falz Mother, a being hellbent on endless destruction. To save the Earth, we must head to the moon, pursue her aboard the Ride Roid, and defeat her.

The Ride Roid has been upgraded with new offensive capabilities for this quest. The Auto Shot automatically fires bullets from the front of the Ride Roid, while Homing Missiles allow for more precise, guided projectiles. When in close proximity to the enemy, unleash a Spin Attack. If you’re starting to fall behind, use the Over Boost ability to increase acceleration.

This Emergency Quest will only occur at pre-scheduled times and can be cleared just once per occurrence on each ship.

The Phantom Mother Collection includes the new [Astra] series of weapons. Once unsheathed, these weapons produce a visual effect of floating cubes that converge into the ESC-A symbol. In addition, a ★13 Redran egg is also available in the collection. These sheets focus on the new Emergency Quest and enemies that appear on Earth.

The December 21st update marks the debut of the hotly anticipated ★14 rarity weapons! Getting your hands on one won’t be so easy, as they will not be included in the Collection File and can only be acquired as a drop. To compensate for their low drop rates, their elemental and overlimit caps will be maxed out, allowing you to grind straight to +35.

Redran is a Dragon-type pet who specializes in long distance attacks. Its [Redran Laser] PA is capable of locking onto several enemies to barrage them with homing lasers. Another move called [Redran Burst] produces several orbs dependent on how long the PA was charged. Similarly to Cery, it can pull enemies together with its [Redran Gravity] ability. 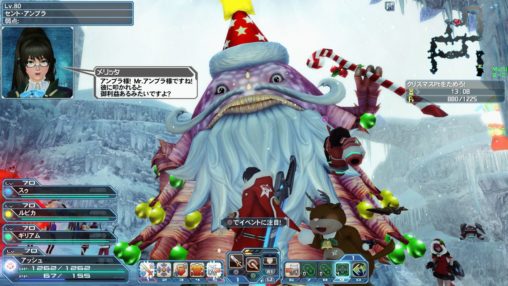 Celebrate Christmas any time of the year with the [Merry Christmas 2016 Trigger]! This quest also supports the costume bonus effect, just like its Emergency Quest counterpart.