Aside from this, a new magazine scan revealed the costumes for the Puella Magi Madoka Magica collaboration. 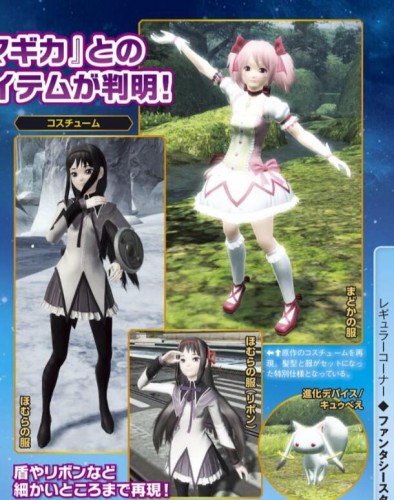 Madoka and Homura costumes, weapon camos, and a Kyubey mag will be arriving later this month. 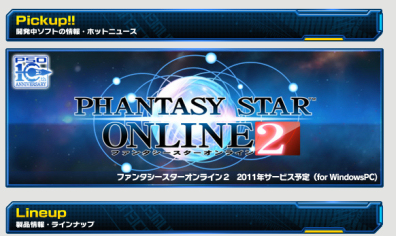 To commemorate the 10th anniversary, Sega is holding events across PSU called the Ragol Memorial Festa where you play in the PSO areas. Also there's a screenshot event for PSOBB where players can take pictures of their time before it shuts down. PSOBB Japan shuts down next week Monday. 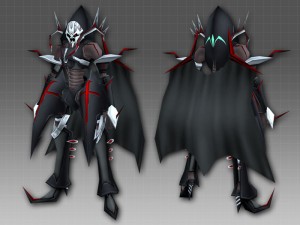 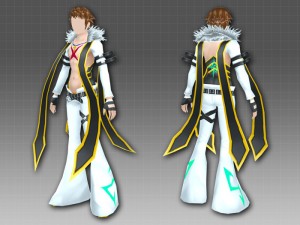 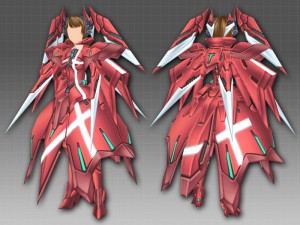 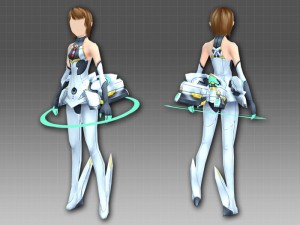 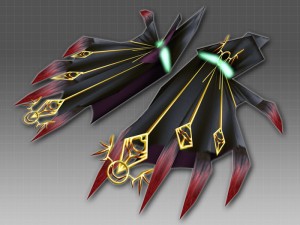 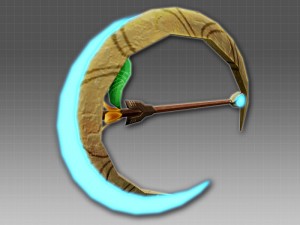 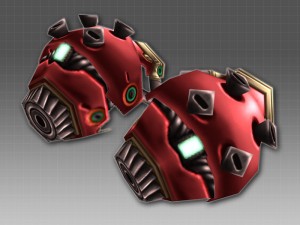 Juggernaut (Knuckles) with the PSIV SE 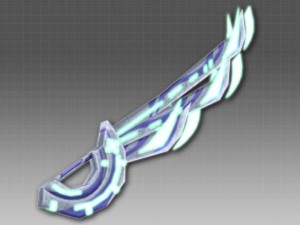 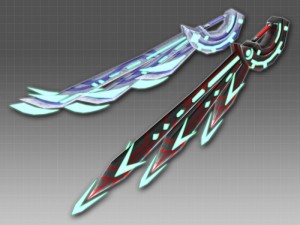 Revolution Will (Twin Sabers) of Acknowledge and Denial 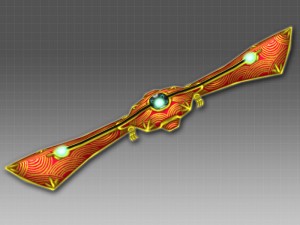 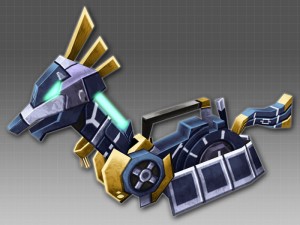 All the winners' items are completely done and will soon ship to each game in the Phantasy Star Series. The details on when that will happen will be revealed in the future.

*The sidebar Charge Shot II will be updated today to reflect the new changes to the weapons.

I was contemplating whether to write this post, you see it's on the technical side of things and there's a few concepts that are hard to understand.  The first part goes into how Sega developed the character creation system of PSU and how it was adapted to PSPo2. The second part will outline the network aspects of how Phantasy Star Online and Phantasy Star Universe handles positioning data.

To start this post you need to understand 2 concepts. The first is linear interpolation. Think of this like the in-betweeners of animation. It animates the movement of an object from one position to another. So a basic example of this, if you had a ball rolling down a hill, you would place your first scene at the top of the hill, and the second scene at the bottom of the hill. The computer then animates what happens in between both scenes through linear interpolation (But of course I'm no expert on this..) The point is for the computer to make the animation smooth between two points!

The second concept is server/client model. Clients are basically the Dreamcasts, Gamecubes, PC, PS2. Server is Sega's computer which you connect to for online gameplay.

(My own commentary will appear this way) 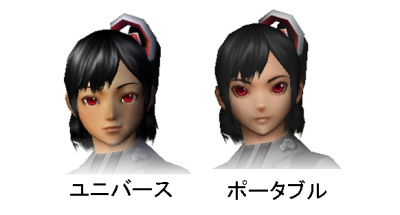 The left is the face shows a model from Phantasy Star Universe, and the right show's its equivalent in Phantasy Star Portable 2. If you played the demo of PSpo2, you may have noticed the facial slider no longer appears in the Character Creation screen. At the CEDEC, Sega developers gave a little insight on the technicalities of the PSP to explain why the slider was removed.

In Playstation Portable, the resolution is very low. Characters lose distinct details of the face when viewed from far away. The team decided to construct new faces that are clearer and easier to identify on the PSP.

In the example shown above, the eyes were made much larger so that one can identify her character from a far distance.

With this compromise, it allows the game to transmit less data for the character's themselves. The lecture continues to show how to implement cost cutting measures when designing characters for an online game.

Cost efficient measures were applied to the new default outfits for the races. When you develop whole outfits, (instead of the separate tops and bottoms like PSU has), the production time is greatly reduced.

The main star of these cost efficient measures are the hairstyles! 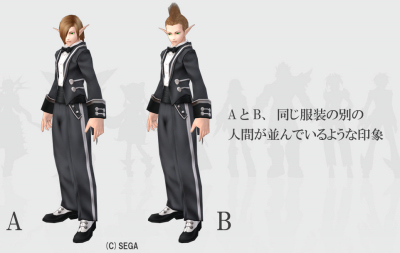 In this example above, you have two characters, A and B who both have the same outfit and facial features. It is determined that A and B are different individuals because they each have different hairstyles. 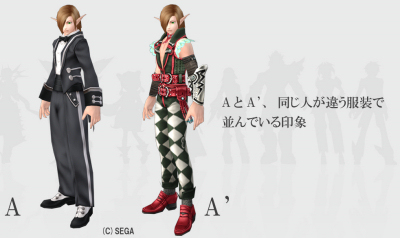 In this second example, if you have two characters with the same hair but change their outfit, it would be considered the same character.  (Personally I don't agree with this line of thinking. In some games, changing your hairstyle greatly changes the identity of your character. Yet in this game, I still feel that I have the same character even if the hairstyle has drastically changed.)

Even having such a slight change can attribute to character variation. The picture above show two characters with similar hairstyles. Their impressions are different because one has longer hair than the other. This changes the overall outline of her face. That modification took around 10 minutes to create, making this very cost efficient.

All 3 shots in the example above use the same face, and eye color. Comparing this picture with the one above it, their faces appear to have decreased in size.  However, these hairstyles do not change the model of the face in any way.

Since online games demand a large amount of character variation, having characters produced this way becomes very efficient. This efficiency isn't just to cut production time, but it also reduces network traffic since you aren't keeping track of many features (like the facial slider).  So with this concept in place, it allows many characters to gather in a lobby without increasing  loading times.