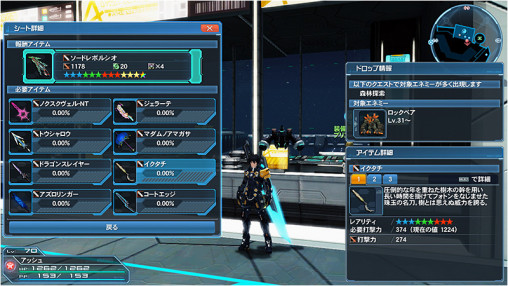 The Collection File is a new system designed to guide players towards acquiring a rare weapon by collecting the necessary materials. Up to three “Collection Sheets” can be acquired at a time from administrator Pudding. The end goal is a rare weapon located at the top of each sheet. 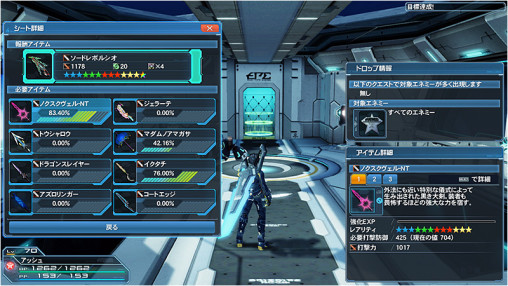 Before getting your hands on the rare weapon in question, you’ll need to head out onto the field and hunt for all of the materials listed on the sheet. These materials consist of various weapons, each with a gauge that will gradually fill when the player defeats enemies specified for that particular item. Once the gauge reaches 100%, the material will drop after defeating the next qualified enemy.

In addition, each reward item for the Collection File has the chance to drop directly from an enemy, giving players another method of nabbing the item.

※A Collection Sheet will enter a cooldown phase once the player acquires the reward item listed at the top of the sheet. It can be accepted again once the cooldown timer has ended. 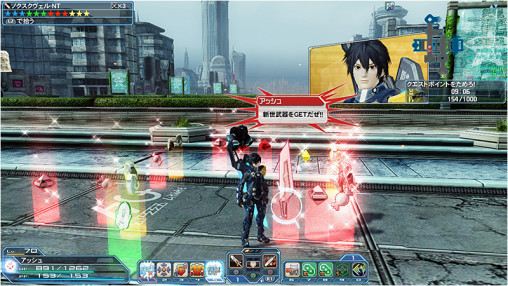 Weapons for a new generation! Starting April 20th, a plethora of currently existing weapons will drop under a new classification known as “New-Age Weapons.” To differentiate from their older counterparts, these weapons will have the letters [NT] appended to the end of their names.

Weapons classified under the [New-Age] type will gain access to a streamlined grinding system that unites several features into a single menu. 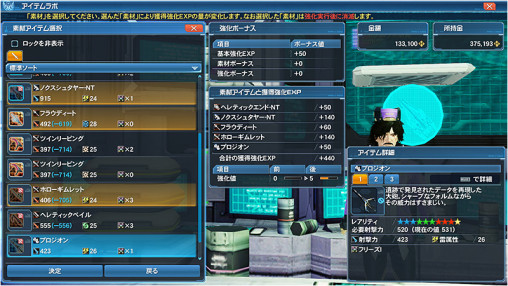 New-Age Weaponry, or [New-Types] for short, will never fail during the grinding process. Players can grind them through the exchange of meseta, grinders, and weapons as fodder in order to increase the [Grind EXP].

The more [Grind EXP] contributed to your base weapon, the higher its [+Grind Value] will rise. This, however, will only occur if the [Grind EXP] has surpassed certain values. In addition, players who achieve a [Great Success] during the grinding process will contribute greater [Grind EXP] towards their base weapon. 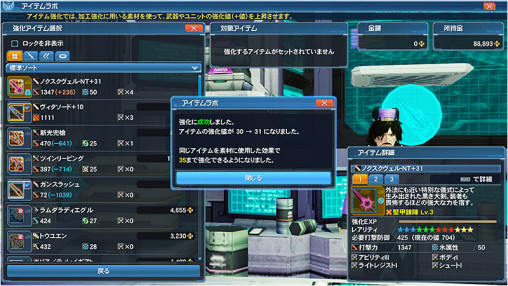 New-Type weapons typically max out at a [+30] grind value. You can increase this cap further by contributing weapons of the same name as fodder. Doing so repeatedly will eventually allow the base weapon to reach a maximum grind value of [+35]. 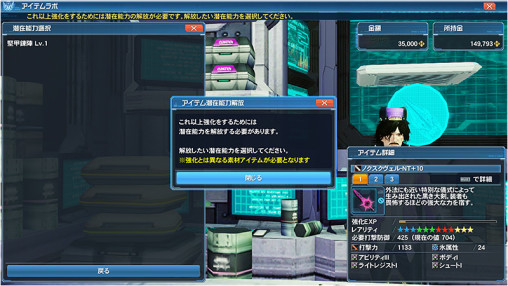 New-Type weapons that reach the [+10] grind value have the possibility of unlocking a potential ability. This ability can be even furthered leveled upon the weapons reaching the [+20] and [+30] grind values.

New-Type weapons can also be attribute grinded at the same time as grinding a weapon. You can even attribute grind them without consuming synthesizers based on which weapons were used as fodder. 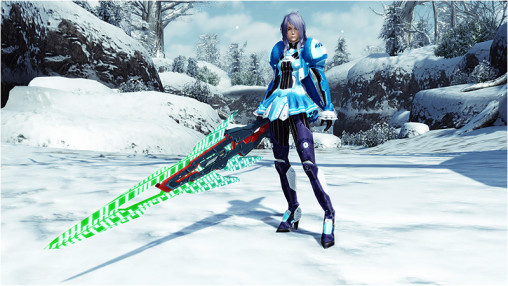 Revolucio Weapons will be offered as our first set of Collection File rewards. These digital themed weapons will be available in the Collection Files until August 10th, 2016. It’s said their performance rivals that of an Ares Weapon, and their potential abilities are easy to activate. Star Gems (SG) are a new currency that will be replacing the use of AC for certain features. They can be purchased with AC or earned for free by clearing certain Bonus Quests or capping the affection level on costumes. The features affected by the new system are as follows:

You can also use Star Gems to reset the cooldown timer on a “Collection Sheet.” 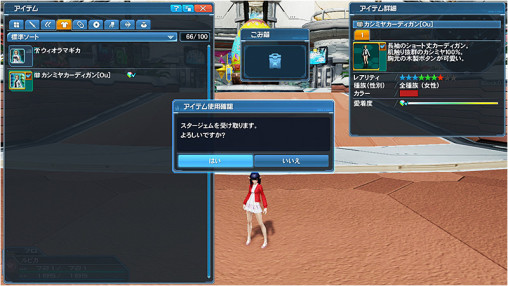 From this update onward, any new costumes, outerwear, or CAST “body” parts added to the game will include an affection level. While you have one of these outfits equipped, its affection meter will begin to fill. Once it fills all the way, you can retrieve Star Gems.

※Costumes added prior to the April 20th update will not support the feature.

As Hitsugi and Al tour the ARKS Ship, we are reunited with two dear old friends. Klariskrays and Sarah will appear in a new Story Board event wearing entirely new outfits. Outside of that, you can expect to see them show up together in a new Emergency Trial. 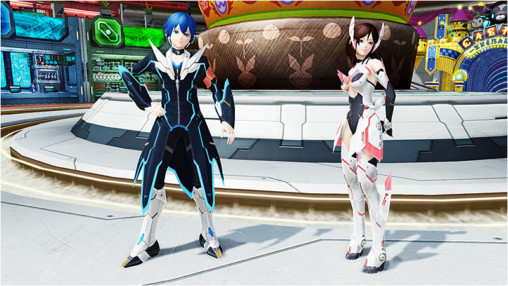 Take out your umbrellas, because In The Driving Rain is back! Collect Quest Points to increase the chances for boss enemies to spawn. This quest will offer an increased spawn rate for Mr. Umblla, as well as the ability for the Empe Rappy to appear. A family of Banthers and Banshees sporting special prefix names await players at the end of the quest. 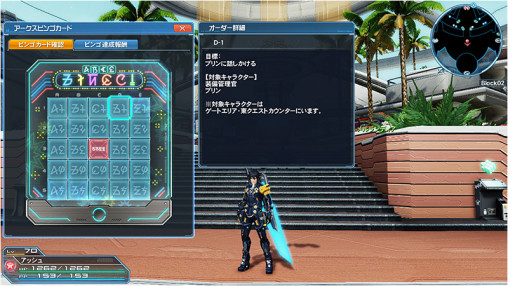 The new Rainy 2016 Bingo will have objectives ranging from new features of Episode 4, to the enemies that appear in the seasonal Emergency Quest. A ticket for five Star Gems is among the rewards, along with the return of the Rainyan Mag device. 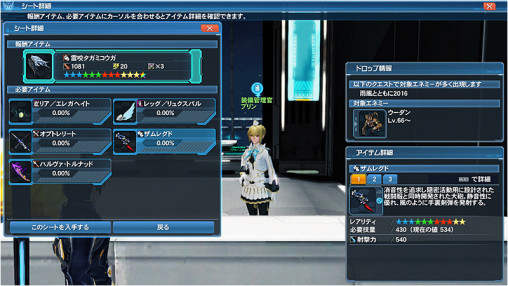 Joining the Emergency Quest are Collection Sheets for Tagami Kazuchi themed weapons. Many of the items on these sheets can be found by defeating enemies that appear within the quest.

Viola is the latest pet to arrive in PSO2! This black and purple pet has a PA called [Viola Change] that allows it to switch between a [high mobility] and [heavyweight fighting] style. 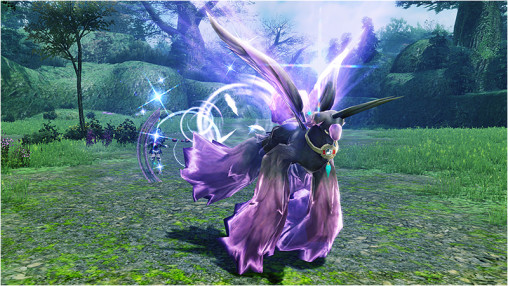 In the latter style, its PP recovery and PA activations are slowed. However, you can switch it back to its original performance by using the [Viola Change] PA again.

The Gathering system will be expanded to support the Desert and Quarry fields. New types of items to harvest and fish to catch means additional recipes at the Skill Ring and Cuisine shops!

Expect to see new L-Rings which grant effects while using the A.I.S, and a new cuisine that increases the chance of obtaining precious gems. A new Practice Quest type will be introduced, training players in the basics of combat. This covers things such as how to learn and utilize Photon Arts and Technics, as well as the features of various weapons. It also serves as a great way for new players to try out other classes.

Board your A.I.S and fight alone against hordes of Kuronites and the might of Magatsu in the new [Special Mission: Magatsu] Bonus Quests! Your results will be based on how long you’ve spent in the quest and the amount of times you’ve boarded the A.I.S. You will also receive a small amount of Star Gems from clearing the quest. 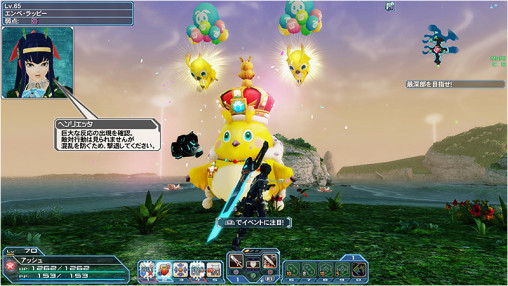 The Empe Rappy is waddling his way into a new free field Emergency Trial. Items dropped by the creature may come with the “Empe Embrace” special ability, which boosts [Grind EXP] when used as fodder. 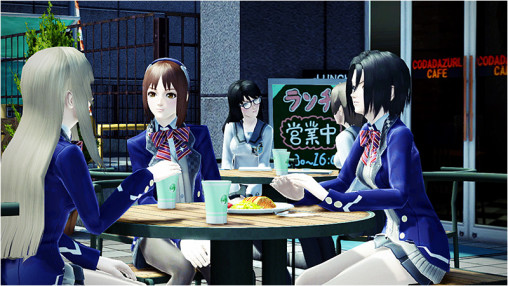 The wait is finally over. PC players will now have the option to turn up their graphics setting to the 6th stage. In addition, there will be new graphical options to tone down the brightness of some particle effects. This option will be available in both the PC and PS4 versions.

As an added bonus, there’s a new [/uioff] chat command that allows players to temporarily turn off the user interface. Players will now be given the choice of setting six actions to their weapon’s palette. This “3-button type” lets players utilize three actions in the front, and three more in the back.

Players who start a new game will have their weapon palettes defaulted to the “3-button” style, while current players will remain in the “2-button” style. (You can switch between each style through a setting in the game options.)

Check out this example of a sword using the 3-button style.

Players can traverse buildings from rooftop to rooftop and reach new heights in the Tokyo Team Room. Find the terminal to activate the [Balloon Collect] mini-game and compete with fellow team members for the fastest clear times. A new lobby action type will allow players to “react” to another person’s action. Just select [Reaction] from the lobby action list to see how your character will act in response to their partner’s lobby action. The launcher will receive a modified design along with this update. With the added features, you can quickly view the list of news and events. A new set of buttons will direct you to the online manual, event calendar, and item catalog, among other things.

Among the new scratch are a variety of new layered costumes, including Toro & Kuro themed t-shirts, a traditional suit for males, and a simple cardigan and sun dress for females.

Also present are a pair of CAST-inspired outfits and a selection of new parts. The bonus scratch will feature smaller versions of the previously released Toro and Kuro suits.

Toro Kuro Nyau will return until June 8th with two new weapon camos to drop. Defeat him in battle for a chance to receive the [＊Toro Nyact ] tact or the [＊Kuro Gunsmyash ] gunslash. 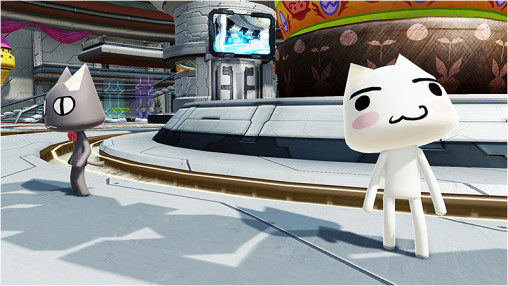 PlayStation 4 players can find Toro and Kuro waiting for them in the Shop Area lobby with new client orders. These NPCs only appear in the PS4 and PS Vita versions of the game.